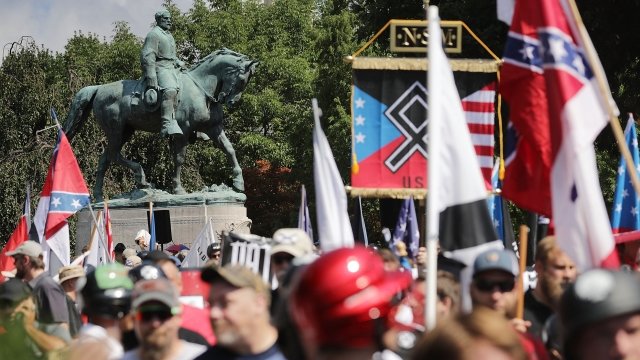 SMS
Homegrown Terror Is More Common Than Islamic Terror In The US
By Zach Toombs
By Zach Toombs
August 14, 2017
Months before the violence in Charlottesville, Virginia, the Trump administration began shifting focus away from right-wing homegrown terror.
SHOW TRANSCRIPT

In the U.S., homegrown right-wing terrorism is more common than Islamic terror.

Almost twice as common, according to an in-depth study that examined cases from 2008 through 2016. Those right-wing attacks often killed police or government officers.

And yet, President Donald Trump cut funding to programs that fight and monitor neo-Nazis and the KKK. In fact, Trump reportedly wants to shift America's counterterrorism efforts away from domestic groups to focus on Islamic extremism.

And in his initial response to the violence in Charlottesville, Virginia, Trump refused to call out white supremacist terror groups by name.

On Saturday, Trump condemned, "Hatred, bigotry and violence on many sides."

Now, some white supremacists seem to be celebrating Trump's comments.

A leader of a white supremacist message board on of the Daily Stormer wrote Saturday: "Trump comments were good. He didn't attack us. When asked to condemn, he just walked out of the room."

Two days later, Trump tried to clarify his comments in another speech.

"Those who cause violence in [hatred's] name are criminals and thugs, including the KKK, neo-Nazis, white supremacists," Trump said Monday.