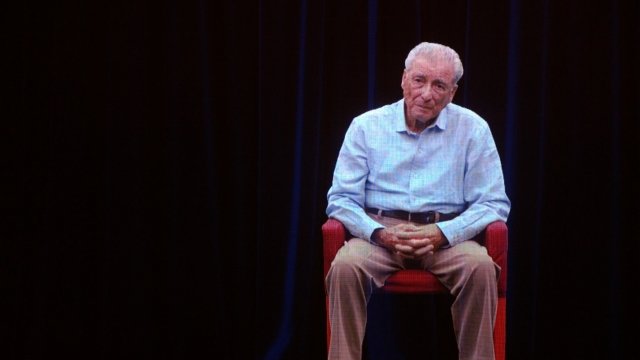 What happens when the last Holocaust survivor dies? Who will tell their story? Is there a way to be remembered forever? The Illinois Holocaust Museum and Education Center in Chicago found a way to permanently preserve survivor stories in the world's first 3-D interactive hologram exhibition. Much like Siri or Alexa, you can ask the hologram questions.

"Do you think you were brave during the Holocaust?" a moderator asked.

The 3-D hologram of Holocaust survivor Aaron Elster answered: "I never considered myself brave or courageous. I just had the audacity, the will, the need to live. Is that courage? Is that bravery? I don't know. I don't look at it that way. I look at it as maybe being selfish because I wanted to live while everyone else around me was dying or being killed."

Elster was 10 years old when he survived the Holocaust in Poland. He escaped the ghetto and hid for almost two years in the attic of a Polish family. A woman named Mrs. Gorski fed him soup and a slice of bread once a day. He didn't step out of the attic until the end of World War II.

"There's so many things that I remember that are so distinct," Elster's hologram says. "Hunger, the terrible wrenching in your stomach. I was so hungry. The daydreams of having a full stomach. What would it be like to be able to say I had enough." 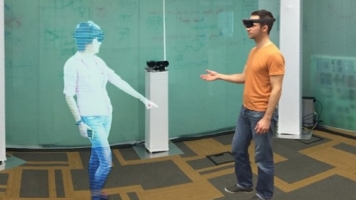 "We had been grappling with how we tell Holocaust survivor stories in an engaging way for generations to come. And we came across the USC Shoah Foundation in California who recorded a Holocaust survivor over multiple days. And then used a custom natural voice-recognition software to allow people to ask the recording a question and have the recording answer," said Shoshana Buchholz-Miller, Vice President of Education and Exhibitions at the Illinois Holocaust Museum and Education Center.

The museum worked alongside USC Shoah Foundation to bring the exhibit to life. Media liaison Josh Grossberg said: "'They all come to Los Angeles for about a week, and they sit under a dome of lights surrounded by more than 100 cameras. And we go through the process of asking them 1,500 or so questions. It takes several days. ... For us it wasn't only about the technology. I know the technology is pretty cool when you look at it. For us, it's all about telling stories."

"Did you keep your faith during the Holocaust?" a moderator asked.

"My faith was troubling," Elster's hologram said. "I didn't lose faith in God, but I questioned his motives. I questioned how he could he stand by and watch 100 and half million be slaughtered for what purpose. What did they ever do?"

Elster settled in Chicago got married, signed up for the military and had two sons.

"After survival, everybody wanted revenge," says the real Elster. "Vengeance for what was done to our lives, to our families. As a teenager I was really full of hate. I realized that if I continue to hate, I'm destroying my own life."

When Elster saw his hologram for the first time, he said: "The truth is, I was crying, and it brought tears to my eyes. I was very emotional, and I don't understand why. ... That human being sitting there, speaking directly to me, I was very much affected by that. So even today, and I've seen it many times with students, I still choke up at certain things because it brings me back to that time."

It's been 84 years since the Holocaust began, but anti-Semitic views still exist. The Southern Poverty Law Center reports an increase of hate groups in the country. The FBI reported an uptick in hate crimes. Of the 1,538 offenses motivated by religious biases in 2016, 54.2 percent were anti Jewish. According to the Southern Poverty Law Center, in 2016 there were 130 KKK groups, 100 white nationalist groups and 99 neo-Nazis groups in the U.S.

"It's scary to know that these things are going on in the United States," Elster said. "We thought when we came here, 'That's it.' We didn't have to deal with it. But there's a resurgence of anti-Semitism both in Europe – more in Europe than here. And there are revisionists that say that it never happened. That it's Jewish propaganda. I've come to the conclusion that maybe the Lord helped me survive so I can do what I'm doing. So I will continue to speak to young people as long as I have a voice. And I've been doing it for 20 to 25 years. And now, my hologram will take over my job."