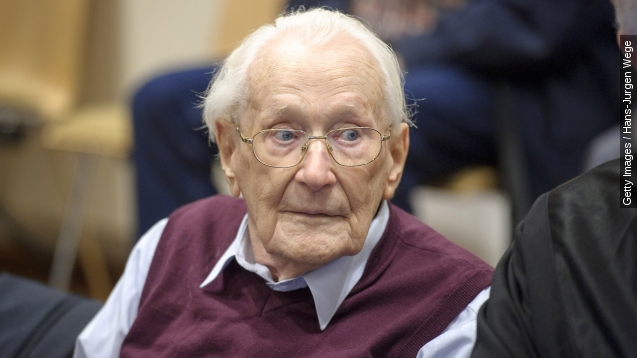 The sentencing of a former Auschwitz bookkeeper prompted a surprising response from a Holocaust survivor.

A German court sentenced 94-year-old Oskar Groening to four years in prison Wednesday for 300,000 counts of accessory charges for crimes at the Auschwitz concentration camp from 1942 to 1944. (Video via France 24)

According to The Telegraph, 81-year-old survivor Eva Mozes Kor told the German court Groening shouldn't be thrown behind bars. (Video via Clarkson University)

"His value is not in sitting in jail at age 94. His value to society is in speaking to students in person or even via Skype about what happened. ... I don’t think it is an easy thing for him to deal with. In jail he doesn’t have to talk about it – he can just rot away," Mozes said.

Groening has expressed "moral guilt" about his past involvement at Auschwitz. He says he never killed anyone but did observe killings.

Auschwitz was one of the largest concentration camps during the Holocaust. In the camp's five years of operation, the Nazi regime reportedly deported at least 1.3 million people to the camp; 1.1 million of those were killed. (Video via BBC)