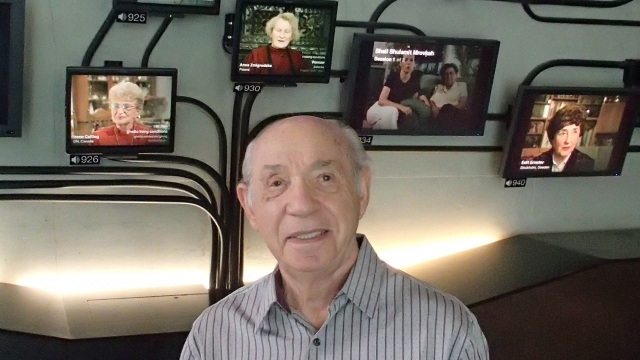 SMS
Holocaust Survivor On Capitol Siege: 'History Repeating Itself'
By Ben Schamisso
By Ben Schamisso
January 14, 2021
David Lenga watched pro-Trump rioters storm Congress — and was deeply pained by the realization that Holocaust lessons have not been learned.
SHOW TRANSCRIPT

"Do not ever take your freedoms for granted. Do not ever think that those freedoms cannot be extinguished in a flash of political unrest."

Death camp survivor David Lenga watched the storming of the U.S. Capitol last week with absolute horror — deeply pained by the realization that the lessons of the Holocaust have not been learned.

"Me and my community of Holocaust survivors are not only totally outraged, but we are absolutely in disbelief," said Lenga, who's a regular speaker at the Holocaust Museum LA.

Lenga, who's 93, says the attack on Congress brought back vivid memories of the 1933 burning of the German parliament, which paved the way for Nazi dictatorship.

"I could not believe that I'm witnessing in my own time this happening in the United States Capitol," he said.

Adding insult to injury for Lenga was seeing images of a rioter wearing a "Camp Auschwitz" sweatshirt.

Lenga, who was born in Poland, was deported to Auschwitz when he was 17. He lost 98 family members during the Holocaust.

"They want their America White, Anglo-Saxon and pure. They don't want anyone else infecting their nation," he said.

After escaping from a Nazi death march in 1945, Lenga was rescued by American soldiers. Today, he says it's America's turn to rescue itself from the growing threat of far-right nationalism.

"I'm horrified for what is next, because the idea that these people were driven by was so horrendous and so ingrained in them," Lenga said.

He urges other Americans to take full stock of the danger and urgency of the present moment.

"When the Holocaust happened, there were no sit-ins, there were no placards on the streets. There were no student demonstrations. There was nothing. Even the pope was silent. The whole world let that happen. We cannot afford a repeat of that."