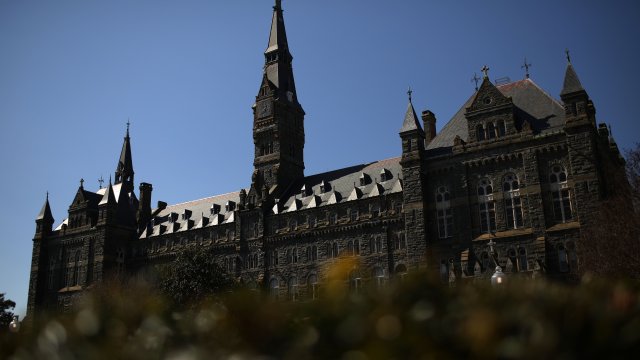 The fallout from a nationwide college entrance bribery scheme continued Wednesday as the accused began surrendering to federal authorities. "Full House" star Lori Loughlin made her first court appearance Wednesday after being taken into federal custody. Her husband, fashion designer Mossimo Giannulli, was released on a $1 million bail after a hearing on Tuesday. And "Desperate Housewives" actress Felicity Huffman was also released Tuesday after posting a $250,000 bail. The Massachusetts District Attorney's office says they're among the 50 people in six states charged with conspiracy for their alleged involvement with the scam. The plot was based on getting students accepted to elite universities by using fake athletic credentials or cheating on SAT and ACT exams. According to the Justice Department, it's the largest college admissions scam ever prosecuted. "We are not talking about donating a building so that the school is more likely to take your son or daughter. We are talking about deception and fraud, fake test scores, fake athletic credentials, fake photographs, bribed college officials," said U.S. Attorney Andrew Lelling. Prosecutors say some parents paid between $200,000 and $6.5 million to William Rick Singer to guarantee their children got in to colleges like Yale, Georgetown, Stanford, UCLA and USC. In exchange, Singer allegedly bribed athletic coaches or paid people to take or modify entrance exams. He allegedly laundered the payments through a fake charity organization, which was investigated by the IRS. U.S. attorneys say Loughlin and Giannulli agreed to pay $500,000 to get their daughters fraudulently recruited as athletes by the University of Southern California. Huffman and her husband, who wasn't charged, are accused of handing over $15,000 to sign one of their daughters up for the exam cheating scheme.  Others involved include two exam administrators, nine athletic coaches and 33 parents, some of whom will make their initial appearance in a federal court in Boston on March 29. Since the news broke Tuesday, at least one charged CEO has stepped down, while some coaches have been placed on leave or fired. Two people have pleaded guilty so far: Singer, to conspiracy and obstruction of justice charges; and former Stanford sailing coach John Vandemoer to racketeering conspiracy. They're set to be sentenced in June. Federal prosecutors say it does not look like the schools themselves were involved. USC told CNN that any applicants linked to the scandal will be denied admission. The university will also conduct case-by-case reviews of students who may be connected to the scheme and make decisions from there.No students have been charged at this point.

Correction: A previous version of this story said those involved in the scheme would be indicted in Boston on March 29. The story has been updated.