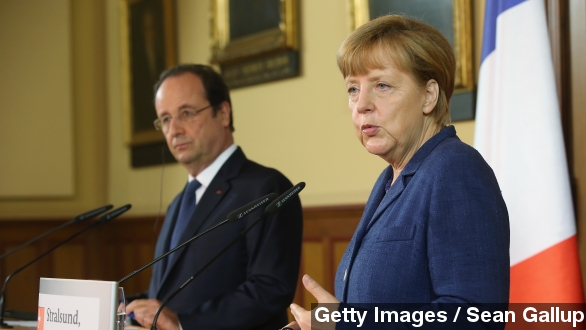 French President Francois Hollande announced he and German Chancellor Angela Merkel would fly to Kiev Thursday to talk with Ukrainian President Petro Poroshenko, saying in part, "It cannot be said that France and Germany together did not try everything, attempt everything in order to preserve peace." (Video via BFMTV)

The pair will then travel to Moscow to talk with Russian President Vladimir Putin.

Hollande and Merkel have attempted to broker peace in Ukraine before, but fighting increased last month between the government and rebel separatists widely believed to be backed by Russia. (Video via Euronews)

While Ukraine and the rebels came to a cease-fire agreement in September, it's largely been ignored — the BBC has even termed it "the cease-fire that never was." (Video via BBC)

Both sides have accused each other of violating the cease-fire — rebels saying Ukraine stripped two eastern regions of their special status for more self-rule and Ukraine saying rebels held their own elections despite that special status saying they couldn't. (Video via Vice & BBC)

U.S. Secretary of State John Kerry was already expected in Kiev to discuss arming Ukrainian forces. This is his convoy Thursday morning. (Video via Sky News)

The New York Times reports The White House hopes the talks of arming Ukraine combined with more sanctions further hurting Russia's economy will be enough to get Putin to agree to stop fighting and abide by September's cease-fire.