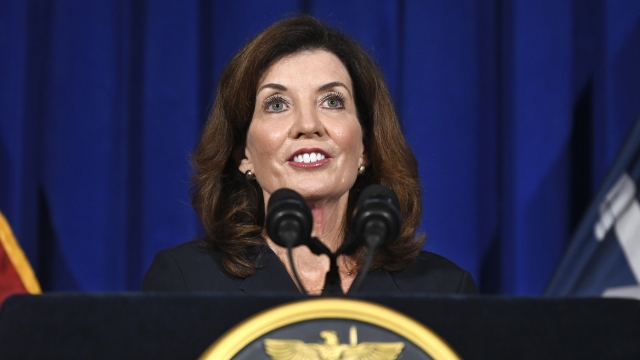 Cuomo announced Tuesday that he would resign rather than face a likely impeachment trial.

Lt. Gov. Kathy Hochul, who will serve out the remainder of Andrew Cuomo's term after he steps down amid sexual harassment allegations, said Thursday she plans to run for governor in her own right next year.

“Yes I will. I fully expect to,” Hochul said in an interview with NBC's “Today” show. “I am prepared for this. I have led a life working in every level of government, from Congress to local government. I am the most prepared person to assume this responsibility and I’m going to ask the voters at some point for their faith in me again but right now I need their faith, I need their prayers and I need their support to make sure we get this right.”

Hochul, a Buffalo Democrat who has served as Erie County clerk and served one term in Congress before winning election as lieutenant governor in 2014, will become the first woman to be New York's governor when Cuomo's resignation becomes official on Aug. 24.

Hochul deflected questions about whether the state Assembly should proceed with impeachment proceedings despite Cuomo's impending exit, telling NBC, “I don’t believe it’s my position to weigh in on that situation.”

Asked whether there should be mask mandates in schools to contain the spread of COVID-19, Hochul said she does not yet have the authority to make that call, but said, “I believe that there’ll end up being mask mandates.”

Hochul stressed that she plans to work with school district officials as well as parents and teachers on the issue of mask requirements.

Hochul said she would draw on federal CDC recommendations and all available COVID-19 data but added, "also, we need be talking to the school districts as well. That hasn’t happened in the past and it’s the way I think it should be. To find out what’s their anxiety. Why there’s any objection to this.”

Cuomo announced Tuesday that he would resign rather than face a likely impeachment trial after Attorney General Letitia James released a report concluding he sexually harassed 11 women and describing a toxic work environment in his administration.

Cuomo, 63, denies that he touched anyone inappropriately and said his instinct was to fight back against the harassment claims. But he said it was best for him to step aside so the state’s leaders could “get back to governing.”

The 62-year-old Hochul, who gave her first news conference as governor in waiting on Wednesday, reiterated that she will not tolerate harassment in her administration.

“I want to make sure that there’s a message that I’m tough,” Hochul said Thursday. “I’m not going to put up with anything that crosses the line or even comes close to the line because this should be an environment where all people, women, members of the LGBTQ community, anyone, is free of harassment that they can come to work, work for the people of New York state, focused and get the job done.”