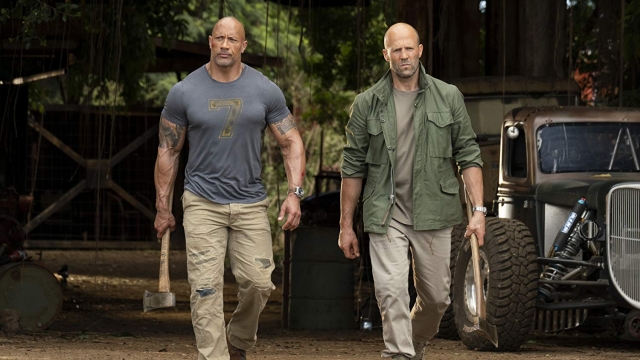 SMS
‘Hobbs & Shaw’ Shows This Franchise Still Has Box Office Muscle
By Jamal Andress
By Jamal Andress
August 4, 2019
Aside from the first two "Fast & Furious" films, every sequel thereafter has made more than half of its worldwide gross from the foreign box office.
SHOW TRANSCRIPT

Taking the No. 1 spot this week is the Fast & Furious spin-off you didn't want but knew you'd get anyway. 'Hobbs & Shaw' starring Dwayne 'The Rock' Johnson and Jason Statham brought in an estimated $60.8 million in its debut weekend.

That's the worst domestic debut of the franchise since 2006' "Tokyo Drift" which famously bombed at the box office and was a complete detour from the Fast & Furious franchise up to that point.

But don't start feeling bad for the Fast & Furious family just yet. The nearly $61 million debut is the eighth best box office debut this year.

Falling right behind Jordan Peele's "Us" which brought in $71 million in its first weekend out.

Not to mention, the Toretto family always does its best work overseas. Aside from the first two "Fast & Furious" films, every sequel thereafter has made more than half of its worldwide gross from the foreign box office and 'Hobbs & Shaw' is no different.

"Hobbs & Shaw" brought in an estimated $120 million at the foreign box office and it has yet to open in China — the world's second largest movie market besides the US.

Falling to No. 2 this week is Disney's "The Lion King" bringing in an estimated $38 million in its third weekend out. The Lion King has officially passed the billion dollar mark but we still need to wait and see if it's going to become the 'king' of Disney remakes.

"Beauty and the Beast" is still Disney's highest grossing live action remake with a grand total of $1.2 billion in worldwide ticket sales.

"The Lion King" is also the second highest grossing film of 2019 but I think second place is as close as it's going to that record.

Finally in third place this week is Quentin Tarantino's "Once Upon A Time in Hollywood" bringing in an estimated $20 million in its second weekend out.

As for next week, Dora seems to be having trouble with her transition to the silver screen.