HK Protesters Take To The Streets For Third Day Of Demonstrations 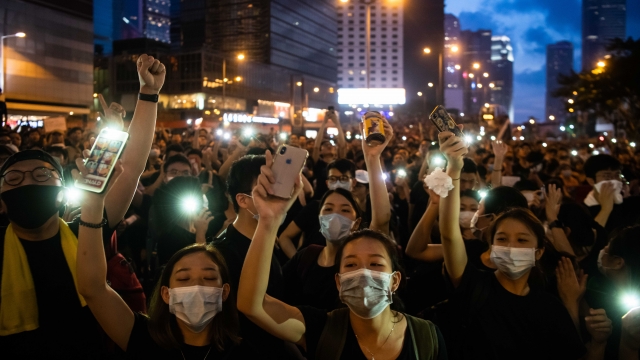 SMS
HK Protesters Take To The Streets For Third Day Of Demonstrations
By LeeAnne Lowry
By LeeAnne Lowry
June 16, 2019
Protesters turned out for another day of protests, one day after Carrie Lam suspended the bill indefinitely.
SHOW TRANSCRIPT

Protesters in Hong Kong took to the streets on Sunday for a third time to protest the controversial extradition bill.

Organizers of the march estimate about two million people turned out Sunday, although police said there were under 400,000. As seen in these videos, shot for Newsy, the gathering was peaceful. Protesters demanded the government release students who were arrested in Wednesday's violent protests and condemn police violence.

Sunday's protest largely centered around calls for Hong Kong's leader, Carrie Lam, to step down. She's been spearheading the bill, which critics believe could be used to target political enemies and would undermine the city's semi-autonomous legal system.

Lam suspended the bill indefinitely Saturday, but protesters want it withdrawn completely. There's widespread distrust in the government's ability to craft a fair extradition bill because citizens don't feel fairly represented. In recent years the government has disqualified several pro-Democracy politicians from the legislature, stacking the votes in favor of Beijing.

Lam's legitimacy is also contested. The electoral committee was already aligned with Beijing when she was chosen, and electors acknowledged being instructed to elect her by callers claiming to represent the Chinese government.

In a statement on Sunday, Lam apologized for her handling of the extradition bill and promised to "keep improving and serve the citizens."

According to Newsy's sources in Hong Kong, people plan to continue protesting on Monday until Lam steps down.