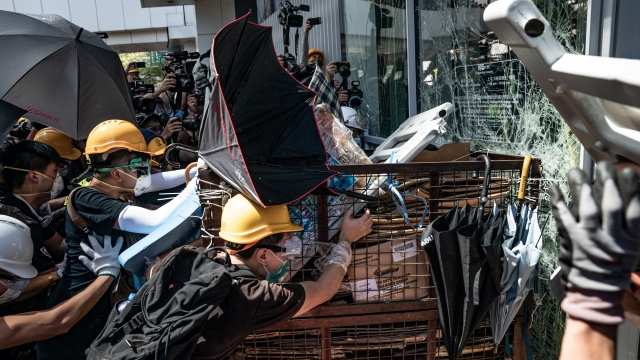 "So this is something we should seriously condemn, because nothing is more important than the rule of law in Hong Kong," Lam said.

On Monday, there were protests marking the anniversary of Hong Kong transitioning to Chinese rule after being controlled by the British for decades. There were also protests against a controversial extradition bill with China. But it quickly escalated and turned violent.

Protesters stormed into the Hong Kong Legislative Council building Monday night local time after spending hours attempting to break down some of the complex's doors and windows. Police were attempting to stop them from entering, but eventually retreated.

Once inside, some of the protesters vandalized the walls of the main legislative chamber, spray-painting over the territory's emblem.

The police then regrouped, and started using tear gas and batons on protesters, who were already attempting to leave the legislative council building.

The police department said in an earlier statement some officers began having breathing problems after protesters threw an "unknown liquid" onto them. In total, 13 officers were taken to the hospital for treatment.

Monday's protests are just the latest in multiple weeks of demonstrations against proposed extradition legislation that would allow China to extradite suspects from Hong Kong.

The demonstrators inched toward their goal when Hong Kong's leader Carrie Lam put the controversial bill on hold. But she's resisted demands to fully withdraw the legislation and step down.

During a speech on Monday, Lam said the protests had shown her that the future work of Hong Kong's government needed to be "more responsive to the aspirations, sentiments and opinions of the community." As a result, she pledged to make the government "more open and accommodating."