There Are Parallels Between HIV-Prevention Drug Truvada And Gardasil 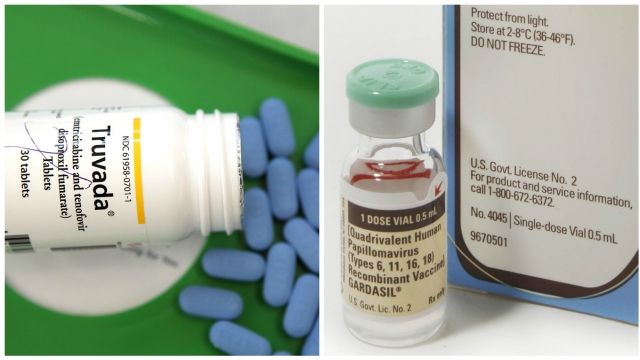 Truvada — aka PrEP — can prevent someone from contracting HIV. But it's not always the easiest topic to talk about with a health professional.

"People on PrEP are admittedly saying out loud that I'm at risk of acquiring HIV in my lifetime, and I think that comes with its own stigma," said Kristin Keglovitz Baker, chief operating officer at Howard Brown Health in Chicago. "Sometimes for some people, it identifies them right away as someone who is at risk. For some people, it identifies them in a community where they're not necessarily comfortable."

That's because critics of PrEP think it promotes unsafe sex practices, especially among the LGBTQ community. Keglovitz Baker sees a parallel between PrEP and a popular vaccine.

"I always relate it to Gardasil," Keglovitz Baker said. "If Gardasil was marketed as a cancer prevention vaccine, we would've had a lot more uptake. But because it was marketed as a sexual health vaccine for HPV, parents sort of shied away from it. It meant that we were admitting that our young people have sex."

Gardasil forced parents to talk about HPV, the most common STD in the U.S., which could lead to cervical cancer in women. The vaccine didn't promote promiscuity — but some saw it as such.

Keglovitz Baker said PrEP is in the same boat. She applauds the AIDS Foundation of Chicago for changing the conversation about PrEP: It's not a drug that promotes condom-less sex. Instead, it allows people to take control of their own prevention stories.

"Chicago had a great marketing approach this year, with kind of coupling it around relationships, communication, love and romance and sexy messaging, which I think appeals to people, and again, makes them feel excited about it rather than this is something I don't perceive I need, or I'm really scared of it, or it has to do with HIV," Keglovitz Baker said. "I think the more we can use images of the people who are most affected by HIV, and the more we can have those messages come from those communities, the more we're going to get it in the hands of people that need it most."