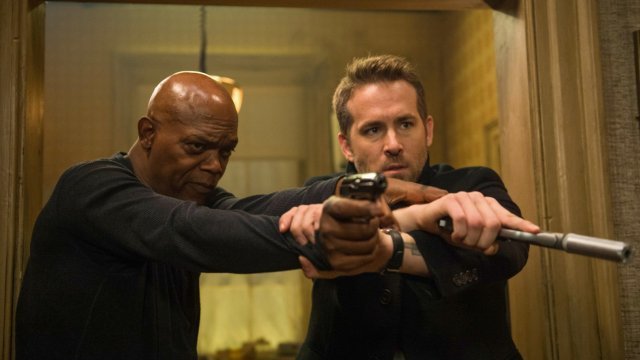 By Jamal Andress
August 20, 2017
Despite a score on the low end of the Tomatometer, "The Hitman's Bodyguard" scored high marks where it counts: the ticket counter.
SHOW TRANSCRIPT

Taking the No. 1 spot this week is a buddy cop flick that would make Danny Glover blush. "The Hitman's Bodyguard" brought in an estimated $21.6 million in its debut weekend, overcoming less-than-solid reviews on its way to a more-than-solid opening.

As the summer movie season comes to a close, weekend box office revenue has been down nearly 30 percent. Fortunately, though, "The Hitman's Bodyguard" only cost about $29 million to produce, which makes this debut even better for the folks at Lionsgate.

Critics over at What The Flick?! called the movie "never as funny as it could be," "the textbook definition of 'whatever'" and "off, tonally."

But much like with "The Emoji Movie" from last month, not everybody is checking with "professional movie watchers" before they decide if they're heading to the theater.

So despite a score on the low end of the Tomatometer, "The Hitman's Bodyguard" scored high marks where it counts: the ticket counter.

Falling to No. 2 this week is "Annabelle: Creation," bringing in an estimated $15.5 million in its sophomore weekend.

Taking the No. 3 spot is this weekend’s other new release. "Logan Lucky" brought in a mediocre $8 million in its debut weekend.

Despite the average opening, "Logan Lucky" seemingly did everything right. For one, its stars include Daniel Craig, aka James Bond; Adam Driver, who doubles as Kylo Ren; and Magic Mike, who occasionally goes by Channing Tatum.

Also, this heist film was directed by the same Oscar winner who was in the director's chair for all of the "Ocean's" movies.

And to top it all off, it has a 93 percent on the Tomatometer. So what happened? Well, I guess it's just hard to beat Samuel L. Jackson and Ryan Reynolds screaming at each other.

As for next week, no wide releases. But "Leap" will be in select theaters, so take your little Misty Copeland to the multiplex.