How Did America's Food Assistance Program Get Started? 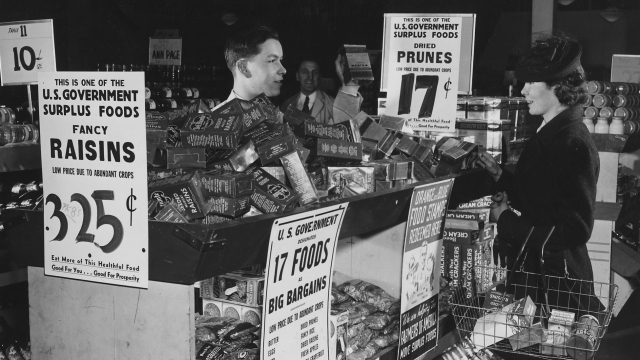 The Trump administration is on track to institute some controversial changes to the country's food assistance program. But how did that government benefit become the system people know today?

The country's food assistance is officially known as the Supplement Nutrition Assistance Program, or SNAP. But it's commonly referred to as food stamps, and that name derives from the early versions of the program that literally used stamps.

The first food stamp program was started in 1939 to help address both widespread unemployment and food surpluses. Eligible families bought orange food stamps and used them to buy whatever food they wanted. For every $1 of orange stamps they purchased, they received 50 cents in blue stamps. The blue stamps could only be used to buy foods the government said were in surplus.

That program ended in 1943, and it was 18 years before the government started a food assistance program up again.

In 1961, President John F. Kennedy launched a food stamp pilot program. It worked a lot like the previous one, since families still had to purchase food stamps. But the stamps became cheaper. For example, a family that paid $22 for food stamps would receive $62 in vouchers.

The Kennedy pilot program was tested in select regions around the country. In 1964, President Lyndon Johnson signed the Food Stamp Act, making the program permanent.

Various laws have modified it since then, changing the eligibility guidelines, work requirements or funding levels. Notably, in 1977 under President Jimmy Carter, Congress eliminated the purchase requirement, which meant the government started distributing food stamps to eligible families for free.

Today, families get their SNAP benefits delivered electronically into an account they use like a debit card. They can buy food like fruits, vegetables, meat, bread, cereal and snacks. But the benefits can't be used to buy alcohol, vitamins or supplements, prepared foods, or household products like cleaning supplies or pet food.