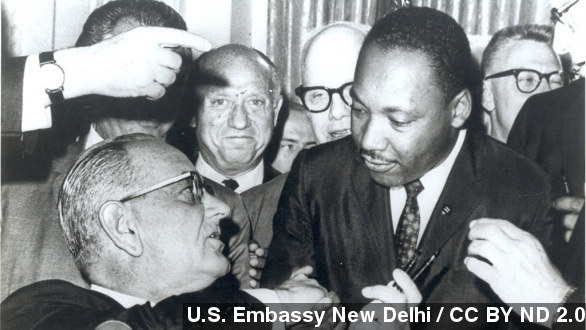 Martin Luther King Jr. said in 1967: "You are somebody. Don't let anybody make you feel that you are nobody."

Close to 50 years on, Martin Luther King Jr.'s voice is still powerful to hear, but it's not always easy to find online. (Video via U.S. National Archives)

That's because the rights to the speeches are tightly controlled by King's estate, which has kept them from being widely shared on the Internet or used in films like "Selma."

But The E.W. Scripps Company has made a series of clips of King available online, and we've got them for you here.

On calling on the black community in Cleveland to vote, July 1967:

"We have enough potential voting power here to change anything that needs to be changed, and so let us set out to do it and to do it in no uncertain terms. If we will organize like this, we have a power that can change this city," King said.

King told a reporter, "The negro all over the United States is tired of second-class citizenship, tired of being relegated to the status of a thing rather than a person, and I'm sure if this problem isn't solved in the very near future, it can mean some very dark and desolate nights for the whole country."

On ending a boycott in Cleveland, August 1967:

"The lack of income and jobs in our slums breed the riots through which many American cities have suffered," King said. "As long as people are devoid of jobs, they will find themselves in moments of despair that can lead to a continuation of social disorders."

On the power of nonviolence, November 1967:

King told reporters: "Over the last few years of our nonviolent struggle, we have achieved the moral power. ... Now it is necessary to transform this moral power into political power so that we can bring about the necessary political reforms that will solve the problems that we face."

Newsy is a wholly owned subsidiary of The E.W. Scripps Company.