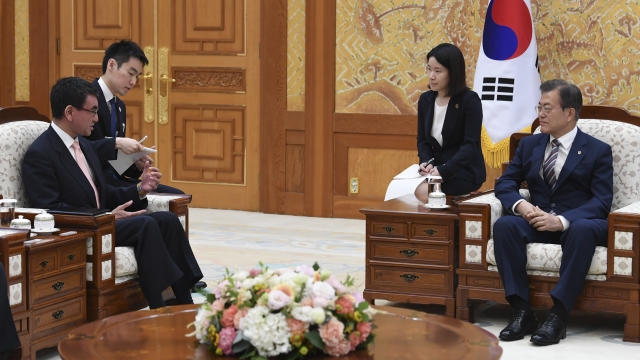 SMS
What A Japan-South Korea Trade Fight Could Mean For Tech Industry
By Matt Picht
By Matt Picht
July 19, 2019
Japan and South Korea are on the brink of a serious trade dispute that could upset the global tech industry.
SHOW TRANSCRIPT

Japan and South Korea, two key U.S. allies in Asia, are locked in the middle of a trade war that could upend the global tech industry.

South Korea's major tech manufacturers rely on Japanese imports for several chemicals used to make semiconductor chips and display screens. But Japan has started cutting off exports of those chemicals to South Korea.

That has global implications: South Korean companies Samsung and SK Hynix produce around 60 percent of chips used worldwide, including in some Apple devices. There's no immediate danger of a semiconductor shortage, but more escalation could seriously disrupt the tech market.

Japan's export controls come after South Korea's court system ordered the seizure of property from some Japanese companies in the country, in order to compensate people who were forced to work for those companies during Japan's colonization of the Korean peninsula.

Japan says it's new trade measures are in the name of national security. The country has accused South Korea of allowing dangerous chemicals to fall into North Korean hands.

It's unclear how valid those claims are, but the tactic is a familiar one — President Trump has cited national security to justify raising tariffs on U.S. steel imports last year.

So far the U.S. hasn't taken a very active role in the dispute, but the State Department says it is trying to support a resolution to the recent tensions.