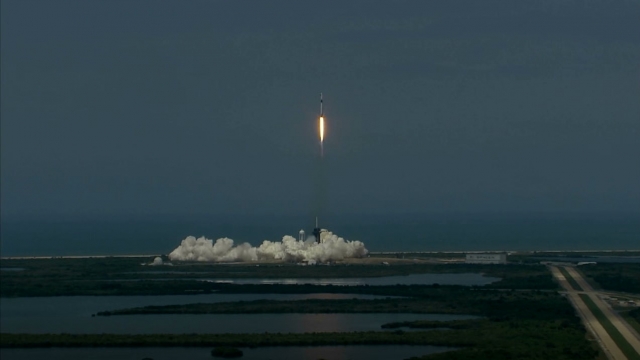 SMS
Historic SpaceX Crew Dragon Successfully Launches From U.S. Soil
By LeeAnne Lowry
By LeeAnne Lowry
May 30, 2020
The launch from Florida marked the first commercial spaceflight with astronauts on board.
SHOW TRANSCRIPT

The ship is carrying two astronauts — Douglas Hurley and Robert Behnken — to the International Space Station.

The Crew Dragon was originally set to launch Wednesday, but Mother Nature had other plans. The private aerospace company scrubbed the launch minutes before the scheduled takeoff because of bad weather.

This launch is historic for a couple of reasons: it’s the first time NASA astronauts have launched on a rocket from a single private company, and it’s the first crewed NASA launch from U.S. soil since 2011.

For almost nine years, American crews have relied on Russian Soyuz spacecraft for passage to the ISS, with NASA paying an estimated $81 million per seat to Russia. NASA awarded SpaceX more than $3 billion to build U.S.-based capsules, so it can become less dependent on the Russian ship.

Boeing was also awarded funds. Its Starliner vessel is in the orbital testing phase.