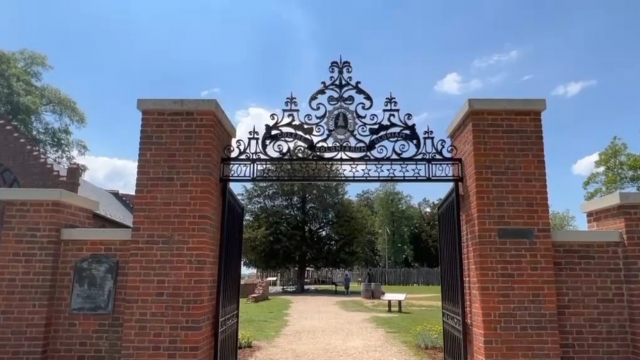 America's European history starts in Jamestown, Virginia, which is the first permanent settlement founded on May 13, 1607.

The 104 men and boys picked the site because it was surrounded by water on three sides. But 400 years later, that's what's destroying it.

Jamestown is one of the National Trust for Historic Preservation's 11 most endangered historic places across the country.

The James River regularly overflows the historic seawall, and heavy rains flood the archaeological sites. Over the last century, the waters around the settlement have risen by more than a foot and a half, and they're going to keep rising an estimated three more feet by the end of the century.

"It's not simply the severity of single storms and coastal erosion, but the increasing frequency of storms," said Malone-France.

The Jamestown Rediscovery Foundation is trying to save it. The group plans to elevate the buildings and roads, repair the seawall and install flood berms — but this might not be enough.

"We are preparing to make decisions about what we may not be able to save," Malone-France said.

And it's not just Jamestown.

"We are going to see impacts of climate change on our historical resources all across this country," said Malone-France.

Other endangered sites on the list include Camp Naco in Arizona, home to the Black Buffalo soldiers who served in the segregated U.S. Army after the Civil War; the Brown Chapel AME Church in Selma, Alabama, a sanctuary for civil rights marchers in 1965 (extensive termite damage forced it to close); and the Minidoka World War II Interment Camps, where Japanese Americans were locked up. Developers want to build a wind farm on the site, which may destroy some building foundations — the National Trust says turbines can be built elsewhere.

"Renewable energy or Minidoka — we can have both," said Malone-France.

There's about five years left to save the Jamestown site before some of history will be lost.