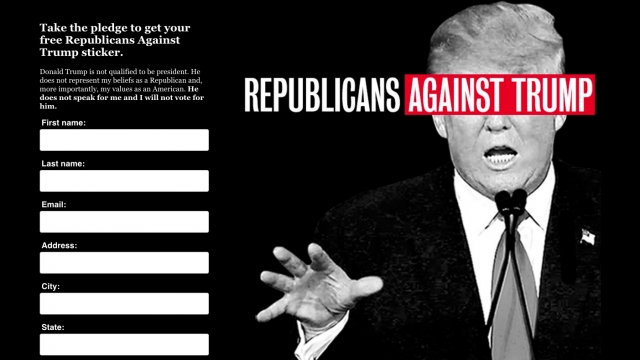 Hillary Clinton is trying to tap into the undecided Republican vote by launching a new strategy against Donald Trump.

It's called Republicans Against Trump, and it's a website paid for by Clinton's campaign.

The site's description reads: "Donald Trump is not qualified to be president. He does not represent my beliefs as a Republican and, more importantly, my values as an American. He does not speak for me and I will not vote for him."

This follows an anti-Trump hashtag — #NeverTrump — which started popping up on social media in February.

There are also several #NeverTrump websites. One of the more prominent ones has gotten more than 40,000 people to pledge not to vote for him.

Although that movement was seen as somewhat of a failure after Trump secured enough delegates for the GOP nomination.

As for Clinton's movement, the idea isn't unfounded. There are already some Republican lawmakers who said they won't be voting for Trump — of course, some might not be voting at all.

And there are a handful of notable Republicans who have already put their support toward Clinton.

One of them is John McCain's former strategist Mark Salter, who tweeted, "I'm with her," shortly after telling Time that Trump was "an awful human being."

With Clinton securing the needed delegates for the Democratic nomination, there will likely be more campaigns from Clinton and Trump's camps as they focus on the race to the White House.

This video includes clips from Hillary for America, images from Getty Images and music provided by APM Music.