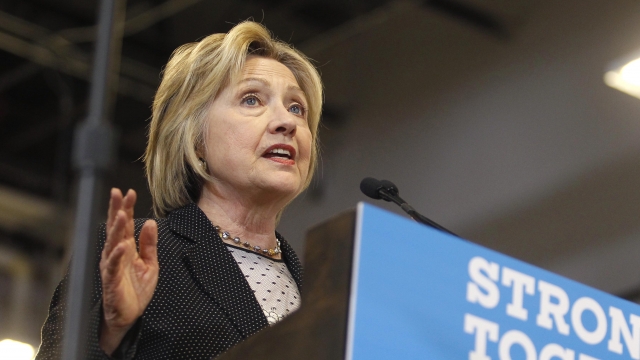 SMS
Hillary Clinton Adds 'Bad At Business' To Her Trump Attack Arsenal
By Eugene Daniels
By Eugene Daniels
June 21, 2016
The presumptive nominee hit her rival on his business record using his own words.
SHOW TRANSCRIPT

"He's written a lot of books about business — but they all seem to end at Chapter 11," Hillary Clinton said at a campaign event.

Clinton's "you can't trust Trump" tour is still going strong. Now, in a speech attacking the billionaire's economic policy, she's using his own words on his company's multiple bankruptcies and his approach to debt.

"He calls himself the 'King of Debt.' .... He said, and I quote, 'I would borrow, knowing if the economy crashed, you could make a deal. It's like, you know, you make a deal before you go into a poker game,'" Clinton said.

The speech started out with the presumptive nominee promising what to expect from a Clinton presidency: higher wages, cheaper college and more people with health insurance. But for the rest of the 35-minute speech, it was all Donald Trump all the time.

We've heard this from Clinton before; on June 2, she went after Trump in the same way over his foreign policy proposals. Her campaign's been painting Trump as dangerous and untrustworthy; now, you can add "unsuccessful businessman" to the list of titles Clinton wants to pin on Trump.

One of Trump's main pitches to the American people is that he's a winner, and now he's going to bat for America. The Clinton campaign wants to poke holes in that argument, and they've found a way to use Trump's own words against him.

Trump didn't challenge the substance of Clinton's claims, but he spun the "King of Debt" title into a credential for managing the national debt. In an Instagram post, Trump said: "I understand debt and how to handle it. I've made a fortune with debt. But debt for this country is a disaster."