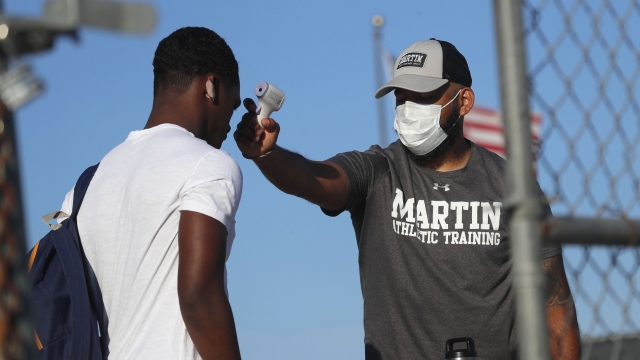 SMS
High Schools Prepare For Fall Sports Despite Pandemic
By Gage Jackson
By Gage Jackson
June 22, 2020
Tens of thousands of athletes are preparing for the fall sports season even though many schools still don't have a plan in place to reopen.
SHOW TRANSCRIPT

Despite uncertainty around when and how students will return to the classroom this fall, many high school athletes and coaches across the nation are still preparing for the return of sports.

As some states continue to ease their coronavirus lockdowns, some are allowing high school athletic programs to return for summer workouts.

In Texas, the culture of high school football runs deep, with some stadiums holding as many as 18,000 fans. Arlington-Martin High School outside of Dallas welcomed about 600 athletes during its first day of summer workouts earlier this month.

Since then, several Texas schools have had to suspend summer workouts as some athletes started testing positive and the state reported a significant spike in the number of new cases.

But it's not just football: Volleyball, basketball, baseball and soccer athletes have also joined the summer workouts at some schools.

Iowa was the first state to welcome back competitive high school sports when baseball and softball programs resumed play on June 15.

Overall, tens of thousands of high school athletes and coaches are eager to get back in action. But as many states see an upturn in new cases, it could further complicate a long-awaited return to normalcy.

Additional reporting by Jim Vertuno of the Associated Press.