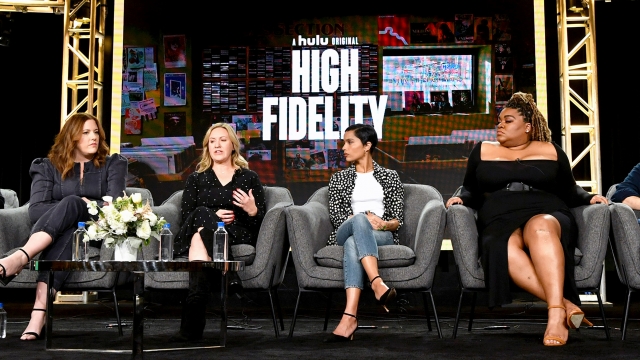 "The making of a great compilation tape like 'Breaking Up Is Hard To Do' — that takes ages longer than it might seem."

"Keep listening. There might be more here than you thought."

Hollywood loves a reboot, so it's no surprise the rom-com classic "High Fidelity" is making its way to Hulu.

The series casts Zoë Kravitz and Da'Vine Joy Randolph in the roles originally played by John Cusack and Jack Black. Newsy got the chance to talk with Randolph about the gender-flipped remake.

Randolph described her character, Cherise, as being passionate about music like Black's character in the original film, but with the added layer of being a black woman in today's society.

"I'm just really most excited for people to see — and Zoë and I had talked about this — an authentic narrative of women, but also of women of color. Because very often, narratives stay very limited."

Other gender-flipped remakes, like Paramount Pictures' "What Men Want", have attempted similar narratives to mixed reviews. The Verge called the film disappointing because it "[could've served] as a corrective to everything clumsy and old-fashioned about its source material or at least outdo it on a simple laugh level."

That same year, a writer from The Atlantic called "The Hustle" a "lazy gender swap" of its source material, "Dirty Rotten Scoundrels."

Despite those flops, other reboots and remakes have found critical acclaim.

Last year, the BBC praised HBO's limited series "Watchmen" as a "perfect comic book adaptation." Granted, the series was more of a loose "remix" of both the comic book and the 2009 film adaptation than a reboot. But it added new layers to the story, focusing on the topics of race and criminal justice through the eyes of a black vigilante played by Oscar and Emmy award-winning actress Regina King.

Following that critical success, studios will likely continue the trend of remaking and "remixing" older, popular titles. That's especially true for streaming companies like the Disney-owned Hulu, which hopes to draw in new subscribers with nostalgia.

Days before the debut of "High Fidelity," Rolling Stone called it a "loving cover, neatly updated for today." Randolph attributes that to the series' subversion of older rom-com tropes and its authenticity to women.

"I would say, from our perspective, that you're giving women a chance to have an authentic voice that is reflective of the time of now, that's not just the dude's perspective — and to see just how it can in fact translate and still apply, whether it's male or female."