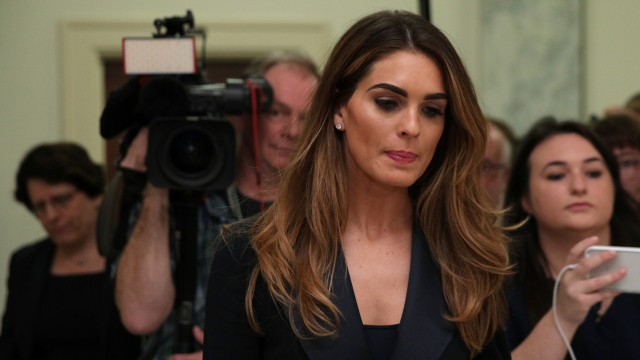 Former White House Communications Director Hope Hicks reportedly refused to answer any questions about her time in the Trump administration during her congressional hearing Wednesday.

Hicks appeared before the House Judiciary Committee in a closed-door hearing as part of its investigation into potential "obstruction of justice, public corruption, and other abuses of power" by the president and administration officials. The committee sent Hicks a subpoena last month to testify.

Some lawmakers quickly grew frustrated that White House lawyers had prevented Hicks from answering questions about her time working in the administration.

Rep. Ted Lieu tweeted that he was "watching Obstruction of Justice in action" and that the DOJ objected to "everything that Hope Hicks wants to say" about the White House. Rep. Veronica Escobar echoed that sentiment, saying: "They're not even allowing her to comment on what's in a publicly available report, the Mueller report. It's unbelievable."

In a letter sent to committee Chairman Jerry Nadler on Tuesday, White House counsel Pat Cipollone said Hicks was "absolutely immune" from being compelled to testify on "matters occurring during her service as a senior adviser to the President." He argued that because Hicks used to be a close adviser to President Trump, asking her to testify "would be akin to requiring the President himself to appear before Congress on matters relating to the performance of his constitutionally assigned executive functions."

But Democrats have rejected that stance. Rep. David Cicilline said "there's no such thing as absolute immunity" and that "it's just an ongoing effort by the president ... to prevent the American people from knowing the full truth." Nadler called the move "ridiculous" and one "which we'll destroy in court."

Hicks reportedly did answer some questions about her time on the Trump campaign — she said she did not have knowledge of any hush-money payments made prior to President Trump taking office.

The committee says it plans to release a transcript of the interview within the next two days.

Hicks' testimony, or lack thereof, is just another roadblock for Democrats who are weighing impeachment proceedings against the president. The judiciary committee has already voted to hold Attorney General William Barr in contempt for not handing over the complete, unredacted Mueller report. It's also preparing to sue former White House counsel Don McGahn for not complying with the committee's subpoenas.