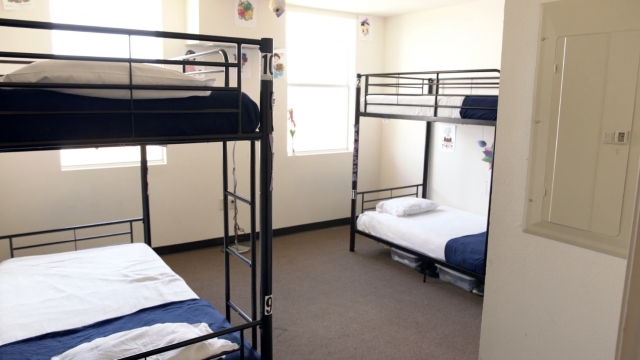 The shelter in Carrizo Springs, Texas is scheduled to remain in use through January 2020.

The Trump administration has a new temporary facility up and running in Texas to house unaccompanied migrant children.

The Carrizo Springs shelter was once a lodging facility for oil workers. It officially opened late last month and is scheduled to remain in use through January 2020.

The Department of Health and Human Services' Office of Refugee Resettlement will pay a nonprofit organization more than $300 million to run the facility.

HHS said the shelter currently has bed space for just over 330 children, but it plans to expand that capacity to as many as 1,300. More than 250 kids have been sent there since it opened on June 30.

Beyond spaces for the unaccompanied migrant children to sleep and eat, the shelter also includes a soccer field, classrooms and a trailer where they can call home to their families.

The shelter's opening comes amid concerns about serious overcrowding and conditions at Customs and Border Protection facilities.

Under current law, unaccompanied children who arrive in the U.S. from a noncontiguous country are transferred over to HHS from CBP. The child then stays in the department's custody until officials can find a relative or sponsor in the U.S. to unite them with. HHS said that since the end of May, it's been taking an average of 45 days to place a child with a sponsor.

HHS said that as of June 10, it's had 52,000 unaccompanied children referred to it by the Department of Homeland Security in this fiscal year.

While an unprecedented number of migrants have been attempting to cross the U.S.-Mexico border in 2019, DHS reported that it saw a 28% drop in border apprehensions in June compared with the previous month.  DHS said it saw a decrease across all migrant demographics, including unaccompanied minors, families and single adults.