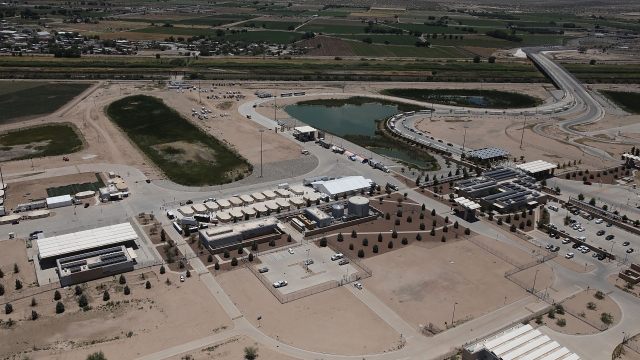 SMS
HHS Is Looking Into Setting Up New Shelters For Some Migrant Children
By Katherine Biek
By Katherine Biek
April 9, 2019
A spokesperson said vacant properties are being considered in parts of Texas, Georgia and Arizona.
SHOW TRANSCRIPT

The Department of Health and Human Services is looking into moving some unaccompanied migrant children out of overcrowded shelters along the U.S.-Mexico border.

An HHS spokesperson confirmed to The Dallas Morning News that it's looking at vacant properties for "potential future use as state-licensed permanent shelter locations" for the children. Those properties are in several parts of Texas, including Dallas and Houston, as well as Atlanta, Georgia, and Phoenix, Arizona.

The move on HHS' part comes as border agents were expected to apprehend more than 100,000 migrants in March. As of early Tuesday morning, U.S. Customs and Border Protection has yet to issue the final totals for the month, but that would be the largest number of monthly arrests in more than a decade.

The high number of apprehensions is causing overcrowding issues at processing centers, which just aren't built to hold that many people.

And outgoing Homeland Security Secretary Kirstjen Nielsen told lawmakers in late March that HHS was likely going to need "thousands of additional beds" in order to accommodate the growing influx of children.