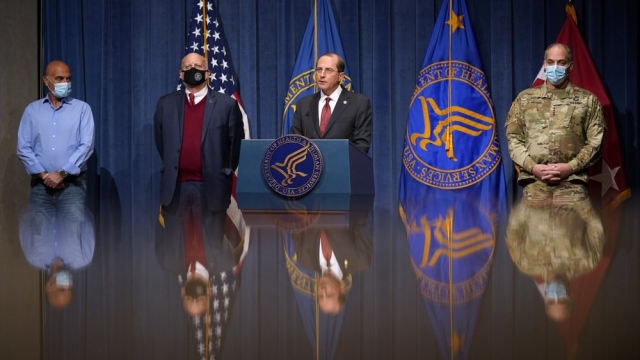 "it's time to move on to the next phase of the vaccination campaign.”

Operation Warp Speed admits it has not been moving fast enough vaccinating Americans. HHS released new guidelines to change  who qualifies for  vaccines -- expanding to people over the age of 65 instead of 75.

The agency is also asking states to expand who administers vaccines. "Hospitals made sense as the early distribution sites when the focus was on health care workers, but they're not where most Americans go to get vaccines.”

Health and Human Services Secretary Alex Azar says states should move on to pharmacies, community health centers and mass vaccination sites as desired or needed. Even Disneyland will now being used as a vaccination site.

HHS will now release all available vaccine doses, rather than holding some back for the second shot -- what Azar called a “safety stock.”

It was a move President-elect Biden disagreed with; his spokesman says Biden "believes the government should stop holding back vaccine supply so we can get more shots in Americans’ arms now.”

Releasing the vaccine supply signals an alignment between the outgoing and incoming administrations, but communication between federal and state governments is less harmonious.

“In some states, heavy-handed micromanagement of this process has stood in the way of vaccines reaching a broader swath of vulnerable population.”

Azar blames states for a slow rollout, despite the agency’s refusal to create a federal program.

States saying there’s a lack of clarity and resources from federal officials.

As of the last update Monday morning, only 35% of the available vaccines had been administered.