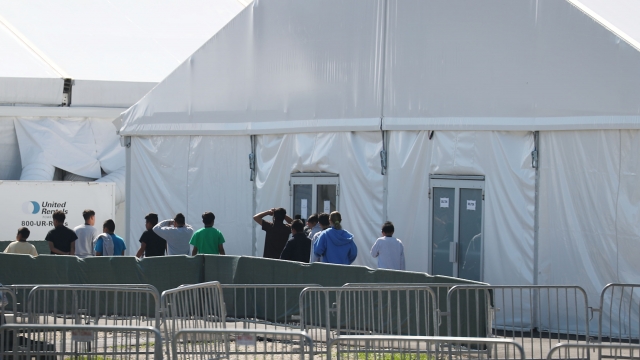 SMS
HHS Discharges Last Migrant Children From Florida Facility
By Katherine Biek
By Katherine Biek
August 5, 2019
The last group of migrant kids staying at the Homestead shelter were either placed with sponsors or sent to the agency's permanent facilities.
SHOW TRANSCRIPT

All unaccompanied migrant children were removed from a temporary facility in Homestead, Florida, over the weekend.

The Department of Health and Human Services told multiple outlets that the last group of migrant children staying at the shelter were either placed with sponsors or sent to the agency's permanent facilities.

Under current law, an unaccompanied child who arrives in the U.S. from a noncontiguous country is transferred over to HHS from Customs and Border Patrol. The child then stays in the department's custody until officials can find a relative or sponsor in the U.S. to unite them with.

Since the facility was activated in March 2018, HHS said more than 14,000 children have passed through its doors. It noted that no new children had been placed there since the beginning of July.

The facility, which is not overseen by state regulators, has been criticized because it's the only shelter for migrant children being operated by a for-profit corporation.

Critics have described the shelter as a sort of makeshift prison camp, pointing to the children walking in single-file lines, not being allowed to touch or hug each other, and sleeping as many as 200 to a room.

Late last month, the Trump administration similarly discharged the last group of unaccompanied migrant children staying at another temporary facility in Carrizo Springs, Texas. That shelter had been up and running for less than a month.

The discharge of the remaining kids being housed at both shelters comes as fewer numbers of migrants are attempting to cross the U.S.-Mexico border during the summer months.

Officials still plan to keep the Homestead facility open for the time being, though it'll be reducing the number of beds from 2,700 to 1,200.