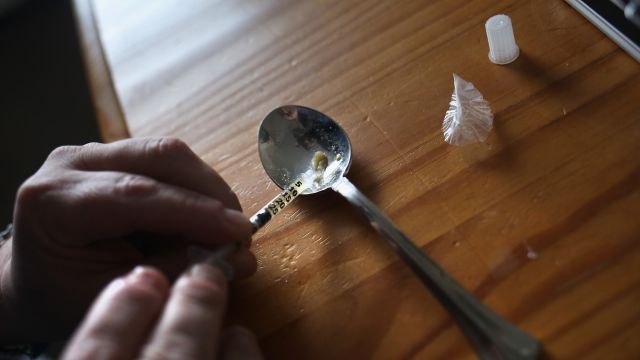 SMS
Heroin-Related Causes Are Killing More Americans Than Gun Homicides
By Briana Koeneman
By Briana Koeneman
December 9, 2016
There were 12,989 heroin deaths in the U.S. in 2015. That's just slightly higher than the number of gun homicides, which totaled 12,979.
SHOW TRANSCRIPT

For the first time in American history, heroin-related causes are killing more people than gun homicides.

According to data obtained by multiple media outlets from the Centers for Disease Control and Prevention, there were 12,989 heroin deaths in the U.S. in 2015. That's just slightly higher than the number of gun homicides, which totaled 12,979.

That's a pretty big jump from just a few years ago. In 2007, gun homicides outnumbered heroin deaths by more than 5 to 1.

Heroin isn't the only opioid causing a spike in fatalities. Overdose deaths from powerful synthetic opioids jumped more than 73 percent in 2015, and fatal overdoses involving prescription opioids went up 4 percent. More than 33,000 Americans died from opioid overdoses in 2015.

As Centers for Disease Control and Prevention Director Tom Frieden said in a statement: "Prescription opioid misuse and use of heroin and illicitly manufactured fentanyl are intertwined and deeply troubling problems. We need to drastically improve both the treatment of pain and the treatment of opioid use disorders and increase the use of naloxone to reverse opioid overdose."

Heroin deaths have been rising for years in the U.S. In June, the Drug Enforcement Administration found that heroin-related deaths more than tripled between 2010 and 2014.

That sharp increase has had lawmakers scrambling to find solutions. Congress passed several bills in 2016 to help combat the U.S.' opioid problem. And in mid-December, President Barack Obama plans to sign the 21st Century Cures Act, which will invest $1 billion in expanded access to drug treatment.

This comes at a time when health and well-being in the U.S. aren't looking as good as they used to. Researchers recently found American life expectancy has decreased for the first time in decades.