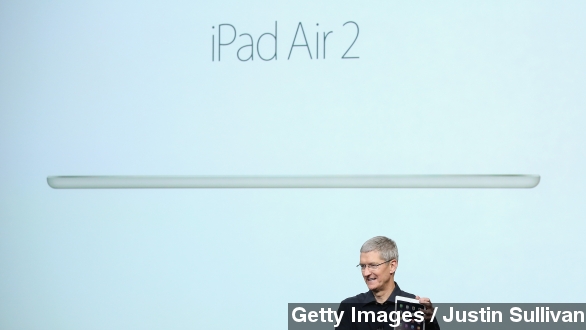 SMS
Here We Go Again: Apple Releases iPad Air 2 After New Phones
By Erik Shute
By Erik Shute
October 16, 2014
Fresh off of its release of two new iPhones, Apple kept its PR engine moving Thursday with the launch of the new iPad Air 2, among other updates.
SHOW TRANSCRIPT

Picking up where it left off a month prior, Apple kept a full room and online audience in suspense before unveiling its new iPad Air 2 Thursday.

This time Apple has shaved a few millimeters off, reducing thickness to just a hairline 6.1mm.  Flip it to the back and you’ll see a brand new metallic color, gold. On top, the Air 2’s screen is one airtight layer. For the first time, it features an anti-reflective coating, decreasing glare by 56 percent.

However, Apple chose to focus not only on the outside but what’s inside as well.

As expected, iPad Air 2 sports its own A8 chip which was debuted in Apple’s iPhone 6 and 6+. It’s 40 percent faster than its predecessor released only a year ago. (Video via Apple)

All that power still maintains 10 hours of battery life. The chip also supplies more depth to motion tracking, the accelerometer and other biometrics. This is no doubt to help advance Apple’s play into fitness, the HealthKit.

Of course no update is complete without a new iSight camera. Air 2 features eight megapixels and HD video recording seem similar to past models, enhanced by the Air 2's new processor.

Users can also snap like they already do with their iPhones with panorama, burst mode, time lapse and slow-motion video for the first time on iPad. (Video via Apple)

Also unsurprisingly, TouchID will unlock iPad Air 2. This feature will ready the tablet for the roll out of Apple Pay, Apple’s mobile payment system. (Video via Apple)

Other hardware updates tagged onto the end of the presentation included the iPad Mini 3. It’s everything the iPad Air 2 can do, but fun-sized.

Moving to the desktop, Apple updated the all-in-one iMac with a 27-inch retina display it calls "Retina 5K."  The $2,500 desktop ships today and features 1.4 million pixels, seven times more than your standard HDTV.

All of these devices will be ready for Apple’s latest OS, Yosemite, which also rolls out today. It features Continuity, Apple's latest magic, which will seamlessly hand off work, phone calls and more to any of these new devices.