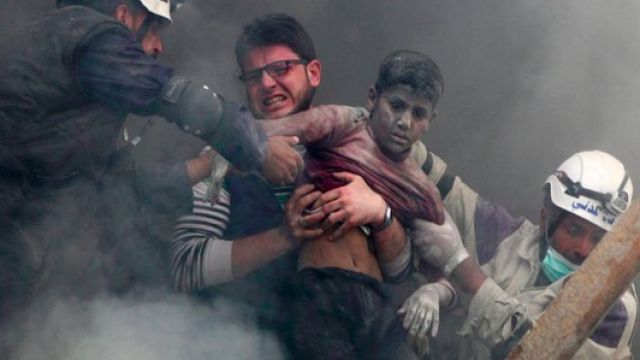 When asked whether he supports the White Helmets' Nobel Peace Prize nomination, Syria's President Bashar al-Assad asked what they had achieved.

It's an odd thing for the president of Syria to ask.

That's mainly because of how many lives the White Helmets claim to have saved — over 60,000.

Members of the volunteer group are often the first on the scene when an airstrike takes place in opposition-controlled territory in Syria. It's not rare to see videos showing White Helmets members rushing into plumes of smoke so they can start digging people out of the rubble.

It's been called the most dangerous job in the world, and for good reason. So far, 141 volunteers have been killed on the job. Many of those deaths have come from "double-tap" strikes, when a plane or helicopter comes back to a site for a second strike against rescue workers.

Teachers, bakers, blacksmiths, pharmacists — the White Helmets come from all walks of life. There are about 3,000 volunteers in the organization.

SEE MORE: These Volunteers Have One Of The Most Dangerous Jobs In The World

One of the group's most widely-shared stories is the "miracle baby" of Aleppo. After more than 11 hours of searching, a White Helmets volunteer named Khaled Omar Harrah pulled a 10-day-old baby, who was still alive, out of a wall in a collapsed building. The baby's name was Mahmud. Harrah was killed in Aleppo in August.

Along with saving civilians hit by airstrikes and barrel bombs, the White Helmets put out fires, safely dispose cluster bomb munitions and clear rubble — pretty much everything you'd expect a war-zone version of a firefighter to do.

With all of this in mind, it's a wonder that Assad had to ask what the White Helmets have done to earn a Nobel Peace Prize nomination.