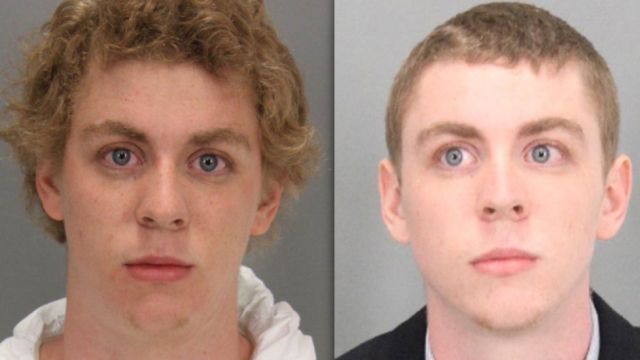 Law enforcement departments have reportedly been fighting for months over which was responsible for releasing a mugshot.

Brock Turner has become a household name seemingly overnight, and his face is now easily recognizable. But until very recently, his mugshots were kept out of the public eye.

The 20-year-old is at the center of a national outrage for receiving just six months behind bars after sexually assaulting an unconscious woman behind a dumpster outside a campus frat party.

The crime occurred in January 2015, but prior to Monday, a mugshot of Turner was never publicly released. Instead, news outlets were using smiling pictures like this one.

The internet was quick to assume that had Turner been a black man, a mugshot probably would've been released immediately.

Monday afternoon, the Santa Clara Sheriff’s Department released a photo of Turner taken after his sentencing. And a short time later, another photo from the night of his arrest was released by the Stanford University Department of Public Safety.

The two departments have reportedly been fighting for months over which was responsible for releasing a mugshot. It's a fight some say worked in Turner's favor.

According to New York Magazine's The Cut, "Turner’s name may be permanently marred by the crime, but he’s granted a reprieve by only having images of him smiling in dress suits available to the public."

A writer for The Washington Post went a step further, saying that we shouldn’t be surprised by the old photo we'd seen circulating, writing: "Bring it on — the brilliant smile of a Stanford swimmer with Olympic dreams, the happy privileged face of a white college kid named Brock Turner. Another picture of him smiling, please. Because this is what a campus sexual predator looks like."

Turner has already started serving his sentence. NBC reports that if he maintains good behavior, he could be released by the start of the fall semester.

This video includes clips from KGO-TV and KNTV.