Big Families Are Out; Education And Income Are In 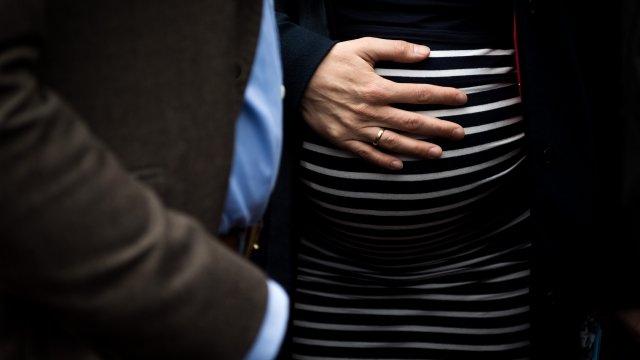 On American TV, big families have brought in some big audiences. On "The Brady Bunch," all six kids were household names: Greg, Marcia, Peter, Jan, Bobby and Cindy.

Today, big families still bring in big ratings. "19 Kids and Counting," the Kardashians, "Full House." They might be on every channel, but giant families aren't so common these days.

Go back to 1800, and American women had between seven and eight children, on average. Today, it's just over two. In recent decades, this trend's gone global. Let's take a tour.

Touching down in Bangladesh, we find women giving birth to an average of just 2.1 kids in 2016, compared to 6.7 in 1960. In Brazil, we see that women had about six kids on average 50 years ago. Today, fewer than two.

Iran dropped even faster: By 2006, each family was having just 1.9 kids, compared to seven in 1984. Globally, the World Bank estimates the fertility rate has dropped from about five births per woman in 1960 to less than half of that today.

What's behind the declines? Education and economic changes, primarily.

For example, one large study on Bangladesh found the combination of increasing education for women and mass migration to cities had the biggest influence. Likewise, Iran's plummeting rate corresponded with huge rises in girls' education.

And globally, The Economist found that fertility tends to start dropping as soon as annual incomes rise above around $1,000 or $2,000 per person.

A related factor: health care. Take contraception, for example. In Bangladesh, 62 percent of women in a marriage or union practiced some form of contraception in 2014, compared to just 7.7 percent a few decades ago. That's approaching recent American rates: 67.7 percent in 1976 grew to 73 percent in 2014. And that's just contraceptive use at any one time: 99 percent of U.S.-based women under 44 have used some contraceptive method if they've ever had sex.

Lowered child mortality has also helped. Studies suggest families tend to have fewer children when the children they have are likely to survive.

And then there's culture. For example, rural Brazilian women who watched telenovela soap operas with glamorous, small-sized families had fewer children than similar women without access to the shows.

And how about religion? Fertility rates have gone down across global religions. But certain religions (like Mormonism) that encourage births and consider them central to social identities do spur an increase.

So while growing a family is highly personal, it's also subject to larger forces like economics, education and the basic world around you.