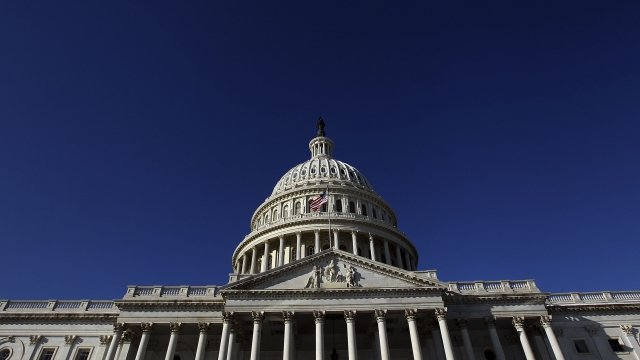 SMS
Here's Who Made The Guest List For The State Of The Union
By Katherine Biek
By Katherine Biek
January 30, 2018
Guests are invited by lawmakers, as well as President Donald Trump and the first lady.
SHOW TRANSCRIPT

The House of Representatives chamber inside the U.S. Capitol is sure to be packed Tuesday night as lawmakers and guests watch President Donald Trump give his first State of the Union address.

So who exactly are those guests? Well, let's start with who the president and first lady invited.

The couple's 15 guests include members of the military and law enforcement, beneficiaries of the new tax legislation, first responders, and families whose loved ones were killed by members of the MS-13 gang. They'll all sit with Melania Trump Tuesday night.

Members of the House and Senate are also allowed to bring guests. CNN reports at least 30 lawmakers have invited immigrants, many of whom are recipients of the Deferred Action for Childhood Arrivals program, better known as DACA.

Some Democratic lawmakers are attempting to bring attention to the #MeToo movement by bringing activists and victims of sexual misconduct.

Another name on the guest list is Bill Nye. Yep, the Science Guy. He was invited by Rep. Jim Bridenstine, who is Trump's pick to serve as the next administrator of NASA.

White House Press Secretary Sarah Sanders announced Monday that 11-year-old Barron will be the only one of Trump's children not in attendance at the speech.