Here's What That Bush-Trump Casino Exchange Was About 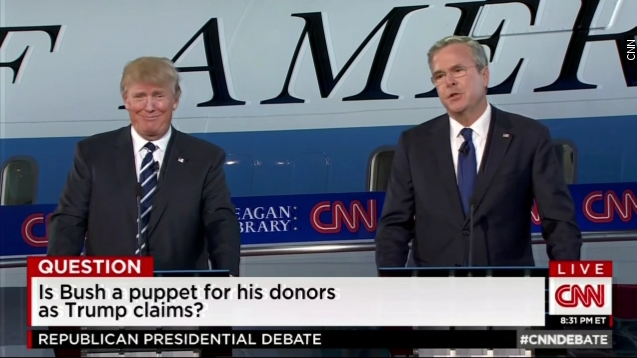 When Jeb Bush was running for governor, Donald Trump threw him a fundraiser. That money was the subject of a heated exchange at CNN's GOP debate.

"The one guy that had some special interest that I know of that tried to get me to change my views on something that was generous and gave me money was Donald Trump. He wanted casino gambling in Florida," said Jeb Bush at CNN's GOP presidential debate.

In the late '90s, when Jeb Bush was campaigning to be governor of Florida, Donald Trump hosted a $500-a-head fundraiser for him at Trump Tower.

At the time, Trump was looking to expand his casino business in Florida. (Video via OWN)

Bush had vowed to keep big gambling operations out of the state. Trump says that's not why he hosted the fundraiser or later donated $50,000 to the state's Republican Party.

"I promise, if I wanted it, I would have gotten it," said Trump.

No way to know what Trump's motivation really was, though he did tell The Wall Street Journal in July, "When you give [to politicians], they do whatever the hell you want them to do." Either way, Trump didn't get his casinos in Florida.