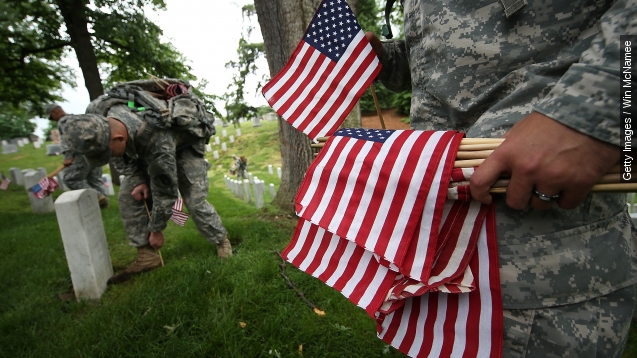 Memorial Day — it's a holiday many Americans celebrate by spending time with loved ones and enjoying the May weather.

But how might some of the more than 21 million U.S. veterans view and celebrate one the county's most somber holidays — created to remember the men and women who died fighting for their county?

Retired U.S. Army General Bob Drolet told WHNT, "We're engaged in conflict today in the Middle East and there are people who are giving their lives almost on a daily basis. So you have to have a day where you remember the sacrifices."

And there are many sacrifices to remember. According to findings from the Pew Research Center, since September 11, 2001 about half of U.S. vets have served alongside a comrade who was killed, with that number rising for men and women in combat.

And because of those first-hand horrors experienced in battle, many soldiers and veterans spend Memorial Day a bit differently than the average American might.

In honor of Memorial Day, Danelo talked to Legacy.com — telling the site for Memorial Day he not only remembers his fallen comrades, but goes to visit the graves of those who may have been forgotten. "There's one cemetery in Philadelphia that has a Civil War veteran who I'll go see. He’s long been forgotten and nobody thinks about him. ... I just walk around there and pay my respects to [his] memory."

The "Flags In" tradition is another way a lot of soldiers commemorate Memorial Day — placing flags on the graves at Arlington National Cemetery.

"It's kind of an emotional process to know, 'cause I feel connected to each one of these soldiers that served before me. So It's kind of like a brotherhood thing. ... We just want to take care of our brothers and sisters. Make sure they look good," PFC Michael Samuel told USA Today.

But still, at least for wounded Retired Staff Sgt. Luke Murphy, there is a feeling that civilians could make more of an effort to pay respects to fallen soldiers.

Murphy wrote in part, "When soldiers die, they don't just roll over and quit like in the movies. They fight like hell. ... And sometimes they lose. The biggest loser is the family, though. ... The next biggest losers are the guys who were with the soldier. Many times they've got survivor's guilt. ... So, what do nonfamily members and nonveterans think about on Memorial Day? Sometimes I think they just don't give a damn."

He suggests that people who want to show respect for members of the military could make a donation to organizations like Homes for Our Troops. That's the program that built Murphy and his family a new home that is accessible for someone with his injuries.

So however you choose to spend Memorial Day, whether by the pool or at a parade — just try to remember why the holiday exists.