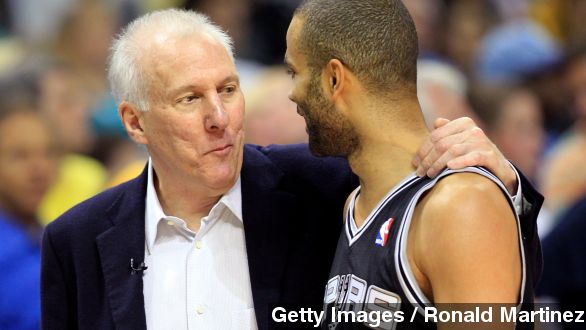 Long-time Spurs head coach Gregg Popovich became the ninth NBA coach to reach the 1,000 win mark, but here's what sets him apart from the pack.

As the Spurs' squeezed by the Indiana Pacers 95-93 Monday night, Popovich recorded his 1,000 career win.

In doing so, the 3-time NBA Coach of the Year joined an elite group of nine coaches to reach the milestone, including Don Nelson, Pat Riley and the Zen Master himself, Phil Jackson.

"I've been here a long time and I've had good players. That's the formula. ... You've gotta be around for awhile, I guess. It's more a tribute to them, obviously, than any coaches," Greg Popovich said.

Popovich was also the third fastest coach earn 1,000 wins. And one of the things that makes his number really stand out is that he’s done it all while maintaining an incredible winning percentage.

In fact, of the top 32 winningest head coaches in NBA history, only Phil Jackson has done better in that department.

And, let’s not forget, Jackson’s run with the Bulls and Lakers was aided by two of the greatest players to ever step foot on a basketball court: Michael Jordan and Kobe Bryant.

Instead, Popovich has relied on the reliable: Tim Duncan, Tony Parker and Manu Ginobili — not the flashiest group, but incredibly consistent. (Video via H-E-B)

Including Pop, the Silver and Black's 4-headed monster has played together for 13 seasons and counting.

They've nabbed four of the five NBA Championships Popovich has racked up, including last year's whooping of Lebron James and the Miami Heat, of course.

Popovich picked up every one of those 1,000 wins during his 19 seasons with the Spurs. That’s currently the longest active head-coaching tenure in the four major sports: MLB, NFL, NHL and the NBA.

By The Wild Animal Sanctuary
1:40