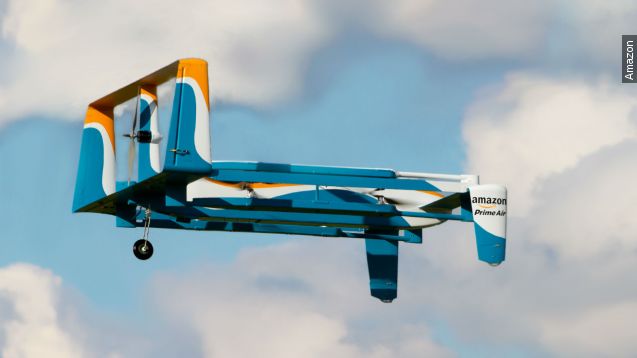 SMS
Here's What Amazon's Drone Prototypes Look Like
By Kaileen Gaul
By Kaileen Gaul
November 29, 2015
Amazon is finally revealing details about its drone Prime Air service. But you can't get it just yet.
SHOW TRANSCRIPT

It's taken a couple years, but Amazon finally released some details about its Prime Air drone service. But you can't order drone delivery just yet.

The company unveiled its drone prototypes along with a commercial starring TV host Jeremy Clarkson. It boasted the service would deliver packages in 30 minutes or less — which is convenient if your bulldog eats your shoe before a soccer game.

So when can we expect drone delivery? Well, the commercial said it was in the "not too distant future."

But Amazon hasn't exactly revealed just how long we will have to wait for the futuristic delivery. It said on its website, "We will deploy when and where we have the regulatory support needed to safely realize our vision."

The drone can fly vertically up to 400 feet and will weigh less than 55 pounds. This weight is probably a response to proposed FAA regulations published in February that will create rules for drones under 55 pounds. (Video via Amazon)

The regulation that hurts Amazon's plans the most is the rule that flights must be within the sight of the operator.

Back in March, the Federal Aviation Administration granted approval for Amazon to research the Prime Air service. Amazon first revealed its plans for drone delivery back in 2013.