Here's How Sterling Could Lose The Clippers 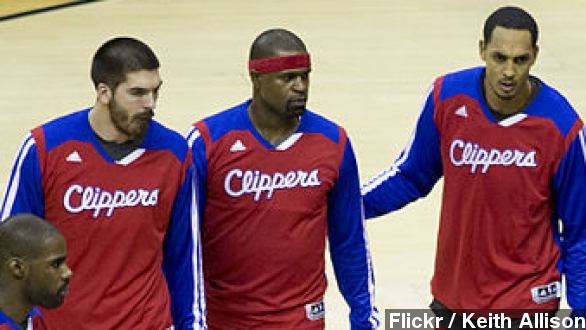 SMS
Here's How Sterling Could Lose The Clippers

By Matt Moreno
April 29, 2014
A three-fourths vote from NBA owners could force Donald Sterling to sell the team.
SHOW TRANSCRIPT

The Los Angeles Clippers owner is no longer allowed in the arena, and soon he may also be forced to sell the team altogether.

By now you likely already know Donald Sterling's backstory. The owner of the Clippers purportedly got caught on tape making racist comments, and it was all put on TMZ.

Then, Sterling was handed his punishment for those comments from the NBA Tuesday, earning a lifetime ban and levied a $2.5 million dollar fine from commissioner Adam Silver — the maximum sentence. (Via CNN)

But, in the press conference announcing Sterling's sanctions, Silver said he'd "urge the Board of Governors to exercise its authority to force the sale of the team." (Via MSNBC)

Basically, Sterling still technically owns the Clippers' even though he's been banned from the NBA forever. Confused?

According to Silver, the punishments are all in line with the NBA Constitution and according to that constitution, the NBA owners need a three-fourths vote to force Sterling to sell the Clippers. Forbes contributor Leigh Steinberg breaks it down. (Via ABC)

"Under the terms of Paragraph 13 of the constitution, NBA owners ... have the right, by three-fourths vote, to revoke ownership if an owner 'fails to fulfill' a 'contractual obligation' in 'such a way as to affect the [NBA] or its members adversely.'"

This situation would theoretically fall under that clause. And at least one NBA owner was quick to let the public know how he felt about Silver's decision.

Still, moments before the press conference, Sterling told Fox News he wasn't sure what the punishment was going to be and said he "will not be selling the team."

It's unclear if Sterling has changed his tune since the punishment was handed down, but one man, a man who's been caught up in this controversy from the start, might be interested in buying the Clips.

A report from Yahoo Monday stated Magic Johnson, NBA Hall of Famer and owner of the L.A. Dodgers, is interested in buying the team.

A vote among NBA owners on whether Sterling will be forced to sell the Clippers is expected sometime this week.