Here's How Brands Capitalized On 'Back To The Future' Day 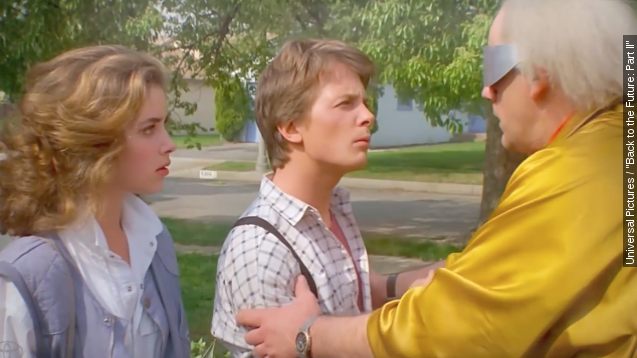 SMS
Here's How Brands Capitalized On 'Back To The Future' Day
By Ben Lawson
By Ben Lawson
October 21, 2015
Brands are seizing the "Back to the Future" hype, and the marketing has been hit or miss.
SHOW TRANSCRIPT

That day is finally here.

SWV: "You have to come back with me," Doc Brown said to Marty McFly.

"Back to the future!" Brown said.

Oct. 21, 2015: the date Marty McFly traveled to in "Back to the Future: Part II," and brands are doing everything they can to capitalize on the hype.

Toyota managed to get Christopher Lloyd and Michael J. Fox to appear in a promotional video for its hydrogen-powered car called the Mirai. The video draws a comparison to how Doc Brown powered the DeLorean using garbage to how garbage dumps are linked to the Mirai's fuel. I bet Toyota's car still needs roads, though.

And speaking of cars, it turns out the DeLorean Motor Co. still exists in some form. It doesn't make new cars; instead, it re-manufactures old models and sells used ones. The "futuristic" design might seem ironically dated now, but it definitely has that nostalgia appeal.

Then there's Pepsi and the easy marketing win that went south. People were super excited to hear the company was putting out a commemorative Pepsi Perfect bottle, like the one from the second movie. However, the limited-run product might have been a bit too "limited," which ticked off some fans who missed out on a bottle.

Nike, however, is successfully milking the "Back to the Future" hype for all it's worth. The company is teasing something involving Michael J. Fox, and many are speculating it's the self-tying sneakers Marty McFly wore in the film.

Too bad there's no hoverboard from Mattel, though. Some other companies have hoverboards in the works, but none look quite up to snuff with the version in the movie.