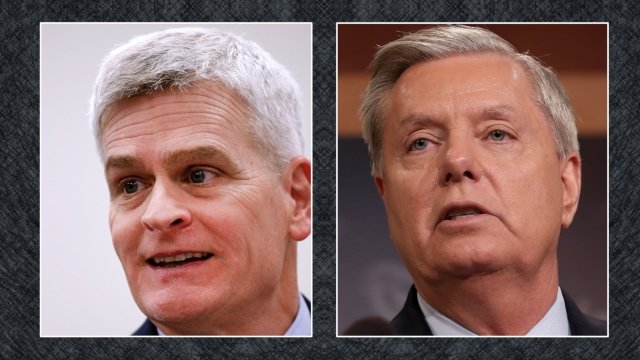 SMS
Here's A Glimpse At The Latest GOP Health Care Bill, Graham-Cassidy
By Jake Jones
By Jake Jones
September 20, 2017
The bill would end the Affordable Care Act's Medicaid expansion and institute a per-person spending cap for the program.
SHOW TRANSCRIPT

Republicans have yet another bill nearing a vote that would repeal and replace the Affordable Care Act.

Senate Majority Leader Mitch McConnell's office said he will likely bring the legislation — proposed by Sens. Lindsey Graham and Bill Cassidy — to the Senate floor next week. That'll give Republicans a small window to pass the bill themselves before a Sept. 30 procedural deadline kicks in.

After this month, Republicans will no longer be able to use the rules of budget reconciliation to get around a filibuster.

Like the ones that came before it, this health care bill has drawn criticism.

"It's certainly frustrating to have to mobilize every couple months to keep our leaders from inflicting real human suffering on our constituents," former President Barack Obama said.

And late-night host Jimmy Kimmel, who became a part of the health care discussion after his son was born with a heart defect that required surgery, raised his concerns Tuesday night about the latest GOP effort to overhaul America's health care system.

"I don't know what happened to Bill Cassidy, but when he was on this publicity tour, he listed his demands for a health care bill very clearly," Kimmel said. "These were his words: He said he wants coverage for all, no discrimination based on pre-existing conditions, lower premiums for middle-class families and no lifetime caps. And guess what? The new bill does none of those things."

Criticism of the bill tends to focus on how it would affect Medicaid and federal funding for health care.

The Graham-Cassidy bill would end Obamacare's Medicaid expansion and federal subsidies for lower-income households. It also changes Medicaid's unlimited payouts to a per-person cap on spending.

In place of those measures, Graham-Cassidy doles out chunks of money in block grants for each state. The states would get more control over how they spend that money, but analyses of the change show several states would receive less funding than they do now.

States would have much more freedom in how they spend federal money on health care under the bill. That includes an option to opt out of ACA regulations, such as coverage requirements and consumer protections.

Previous bills would have left millions of Americans without coverage as compared to levels projected under Obamacare, according to the Congressional Budget Office. But the CBO likely won't get to fully score Graham-Cassidy for at least several weeks; instead, it will put out a "preliminary assessment" of the proposed law early next week.

Despite only having the rest of the month to make things happen, the Senate bill has support in the House of Representatives. But the initial vote could be a nail-biter; Sen. Rand Paul is publicly opposed to the new bill. And with Sens. John McCain, Susan Collins and Lisa Murkowski understood to be at various levels of "maybe," Republicans don't have a lot of wiggle room.