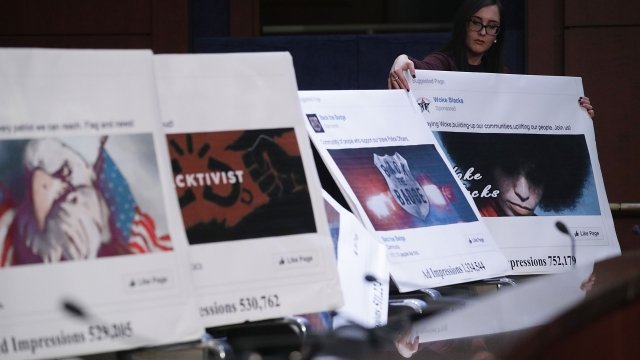 SMS
Here's What Kind Of Content Russian Interests Paid To Run On Facebook
By Jake Jones
By Jake Jones
November 1, 2017
Democrats on the House Intelligence Committee released a sample of the ads on their website.
SHOW TRANSCRIPT

Democrats on the House Intelligence Committee have released some of Russian-funded content targeting Americans that appeared on Facebook during the 2016 presidential race.

They say the ads were designed to stoke fears and political divisions in the U.S. Topics included Muslims in America, police brutality, racism, border security, LGBTQ issues and more.

Facebook's general counsel told lawmakers this week as many as 126 million Americans could have seen politicized content paid for by Kremlin-linked interests. Twitter and Google also testified about Russian content on their sites.