Here Are The States With The Most Enthusiastic Workers 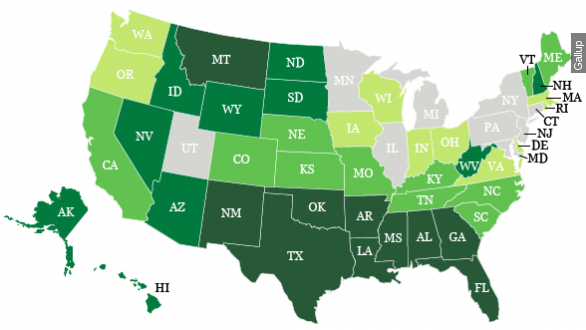 SMS
Here Are The States With The Most Enthusiastic Workers
By Mikah Sargent
By Mikah Sargent
April 28, 2015
According to a new study from Gallup, Montana, Mississippi and Louisiana have the most enthusiastic, engaged employees.
SHOW TRANSCRIPT

Things are looking up for the American workplace — at least in a few choice states. A new study from Gallup reveals the top states where employees are happily and enthusiastically heading into work.

But before we dig into the details, we'll need to provide some definitions.

The study, which surveyed more than 165,000 employed adults between January 2013 and December 2014, uses three terms to define workplace engagement: engaged, not engaged and actively disengaged.

The study's results are broken down state-by-state. Montana, Mississippi and Louisiana have the highest percentage of engaged employees (the ones who are excited to go to work in the morning).

On the other end of the spectrum, Connecticut, New York and Michigan have the highest percentage of actively disengaged employees (the ones who undermine their coworkers).

As you might expect, these numbers have considerable implications for employers. Gallup says its research suggests businesses with engaged employees have a 22 percent jump in profitability over those with disengaged employees.

It's important to keep in mind surveys like this aren't necessarily the gospel truth. Although Gallup says active disengagement tends to correlate with unemployment rates, a writer for The Salt Lake Tribune says Utah — which has a paltry 28 percent of engaged workers — defies the trend. "That connection is puzzling for Utah, which touts one of the nation's lowest unemployment rates."

And there are a whole host of other factors to consider — especially in something as mercurial as employment trends.

So maybe tell your boss to hire a few new employees if the current cast of characters is looking a little, well, actively disengaged.