Helping The Homeless In Frigid Weather Goes Beyond Temporary Shelters 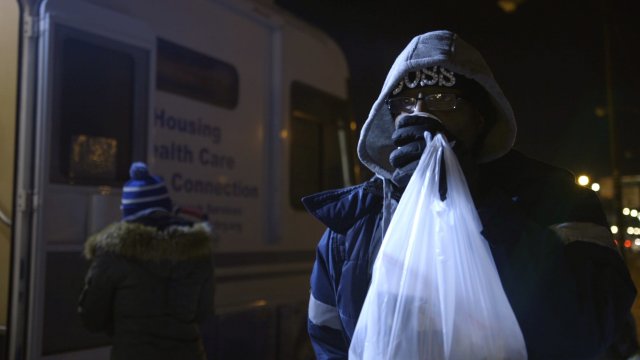 SMS
Helping The Homeless In Frigid Weather Goes Beyond Temporary Shelters
By Ben Schamisso
By Ben Schamisso
January 31, 2019
In negative temperatures, we rode along on an outreach bus that provides clothing, food and urgent medical care to those in need across Chicago.
SHOW TRANSCRIPT

Six days a week, health care and social workers from The Night Ministry ride this bus across Chicago to provide food and coffee, clothing, and urgent medical care to those who need it the most.

Their work is especially important these days. The extremely cold weather is dangerous for everyone and potentially life-threatening for the city's homeless population.

"These are neighborhoods — you can consider them being underserved. So that's why we're coming directly to people there instead of asking people to come to us," said Burke Patten, the senior communications associate at The Night Ministry.

"We do have some supplies like gloves and hand warmers, scarves and blankets and things that we can pass out if they are going to be out there to at least make it more bearable or as safe as possible for them."

Since 2007, the number of homeless people nationwide has fallen by around 15 percent, according to government data. But between 2016 and 2017, the number of people experiencing unsheltered homelessness actually rose by almost 10 percent.

"It means that the shelter system and housing assistance system that we've set up is not working quite well enough for everyone," said Erin Ryan, The Night Ministry's senior vice president. "And then also, I would say, the opioid epidemic has contributed quite a bit to this in Chicago as well as other large cities."

"I think it's also important for the homeless service system to work more directly with other systems that our clients might engage with, like hospitals, the police and the affordable housing, the landlords association, you know, just to ensure that we're all working together," Ryan added.

Because of the frigid temperatures, the City of Chicago and organizations like The Night Ministry are expanding their networks of warming centers and overnight shelters. But for various reasons, some of the thousands of homeless people in the city may still decide to stay outdoors.

"A lot of people don't want to go in these places because they don't want to deal with people taking your stuff," said Kimberly Bailey, who used to be homeless. "You can't go to sleep. You're scared, especially when you have kids. You're scared because these people, they could touch your baby. You never know in these places. Because they don't have a lot of security. … There had been fights, there had been stabbings."

Kimberly Bailey became homeless at 14 and lived on and off the streets for almost 30 years. But last year, the mother of four secured housing thanks to a program that helps homeless families with children enrolled in public schools.

"I've never thought I'd get picked, but when I did, it was like, 'oh my goodness,'" Bailey said.

Now she's a volunteer at the the Chicago Coalition for the Homeless. And as someone who's experienced dozens of Chicago winters in the streets, she does not wish that fate on anyone else.

Bailey: "I have dealt with the harsh  elements, frostbites, man, just can't move. Riding the bus back and forth, back and forth, train, hoping that don't nobody grab you. By you being a female, anything happened in these streets — and I have had everything happen to me, I got the war wounds to prove it, you know what I'm saying, but I'm still here. … But I tell people, even if you don't want to go to these warming shelters, just swallow your pride for a minute and just go in there until the weather breaks."

"People are like, 'No, I'm not giving my money to them,' but it's really a good cause. It's getting a lot of people off the street."

Erin Ryan of The Night Ministry agrees with Bailey. She says organizations that help those in need tend to be overworked when the mercury drops. As a result, monetary donations and supplies are always appreciated.

"Even simple things like cup of soup to help keep people warm, and coffee and other resources like transportation cards [are helpful]. … So we always encourage people to call ahead to an organization that they'd like to support to see what items are most needed at any given time."