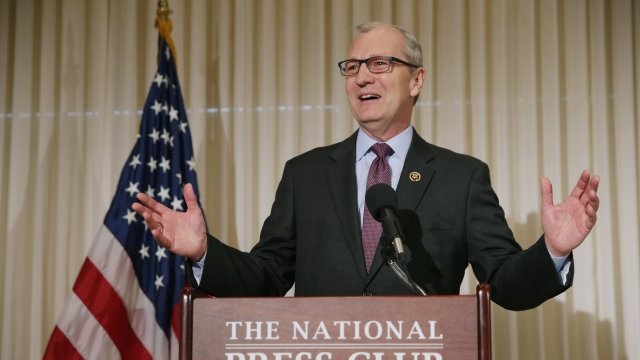 North Dakota Sen. Heidi Heitkamp, a Democrat, is trying to hang on to her seat in a very red state. One way she's trying to do that is by pointing voters to her Republican opponent's votes on a health care law.

"Like 300,000 North Dakotans, Denise has a pre-existing condition," Heitkamp said in a recent ad. "That used to mean no health insurance. ... She has something she'd like to say to Kevin Cramer."

Denise then says, "Mr Cramer, I don't know why you voted to let insurance companies go back to denying coverage for pre-existing conditions."

Before we get into a fact-check here, we should establish that Heitkamp and Denise are clearly talking about the Affordable Care Act. That law made it illegal for insurance companies to deny coverage to someone because of a pre-existing condition.

The 300,000 figure is a rough number of all North Dakotans with a pre-existing condition. But even if the Affordable Care Act were repealed or replaced, the number who would lose coverage is far smaller, only including people who aren't part of a group plan, like through an employer.

Cramer supports keeping companies from denying coverage on the basis of a pre-existing condition. But the laws he's backed would eliminate subsidies for insurance companies that take on high-risk patients. That would mean really high premiums for those people.

So there's some truth to the argument that Kevin Cramer has supported health care laws that would have made it much harder for people with pre-existing conditions to be covered. But it's not as cut and dry, or large-scale, as Heitkamp makes it seem.