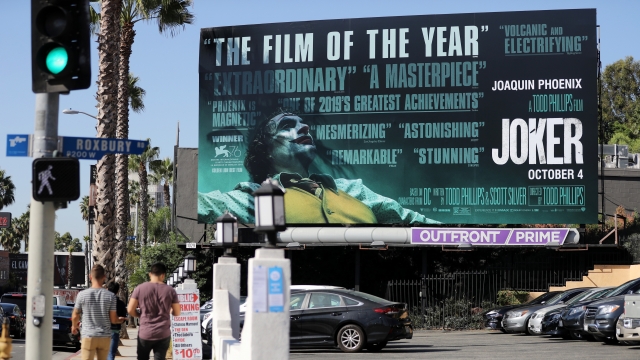 The "Joker" opened in U.S. theaters Thursday with tightened security across the country.

The FBI and U.S. Army issued an internal memo to law enforcement warning of possible shootings at "Joker" showings. Theaters across the U.S. added additional security and some banned costumes and masks. A theater in Huntington beach, California closed after police received a threat.

The movie centers around failed comedian, Arthur Fleck, who doesn't fit in with society. He takes on the persona of a clown, calls himself Joker, and sets out to take revenge on Gotham City.

The movie has sparked fears of copycat violence similar to the movie theater shooting in Aurora, Colorado in 2012 where a man wearing a mask opened fire in a showing of "The Dark Knight Rises" killing 12 people.

Family of the victims of the Aurora theater shooting wrote a letter to Warner Bros. urging the film studio to donate to gun violence survivors, push for gun reforms, and stop donating to political candidates that take contributions from the NRA.

The group wrote, "We want to be clear that we support your right to free speech and free expression. But as anyone who has ever seen a comic book movie can tell you: with great power comes great responsibility."

Even with the criticism and heightened security, "Joker" grossed $13.3 million Thursday.