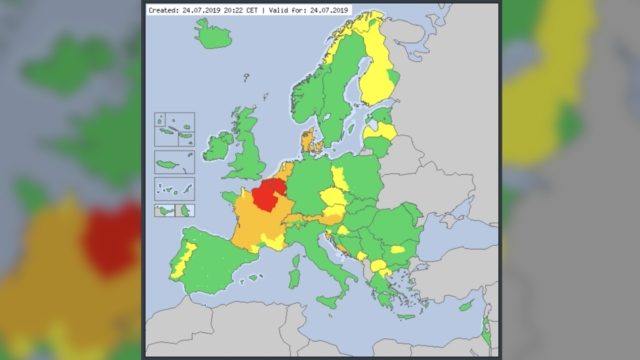 Extreme heat waves across western, central and northeastern Europe are bringing in some of the region's highest temperatures ever recorded. On Wednesday, the Netherlands and Belgium were hit with all-time national heat records.

July is already the hottest time of year in the region, so hitting all-time high temperatures speaks for itself. But these records are being broken by a large margin.

Meteoalarm has been alerting countries throughout Europe of severe heat warnings and updating the dangerously high temperatures on maps.

Nearly all of Belgium is in the "red zone" — the highest warning level for severe heat. The country's hottest day ever reached around 102 degrees Fahrenheit on Wednesday afternoon.

France is mostly in the orange zone, or the second-highest warning level. Meteo-France has put 80 of the country's 96 regions on high alert, with 20 of those in the red zone. Paris is likely to be hotter than 100 degrees, and on Thursday it could peak around 108. The city's highest recorded temperature ever was 104.7 in 1947. In a southern region of France, Meteo-France recorded a new national record, nearly 115 degrees, at the end of June. It marked the first time in modern history that anywhere in France has exceeded 113 degrees.

A heat wave is a period when temperatures are at least 5 degrees Celsius above average for five consecutive days, according to the World Meterological Organization.

Eventually, this heat wave is expected to move into Scandinavia and the Arctic Circle, and it could likely set more heat records in Sweden, Norway and Finland. It could also further melt sea ice, which is already at an all-time low for this time of year.

Meteorologists are also expecting higher temperatures on Thursday for the U.K. and Germany, where the national records are 101.3 and 104.5, respectively. Spain is also expected to approach 105, which would be the highest temperature ever recorded there.