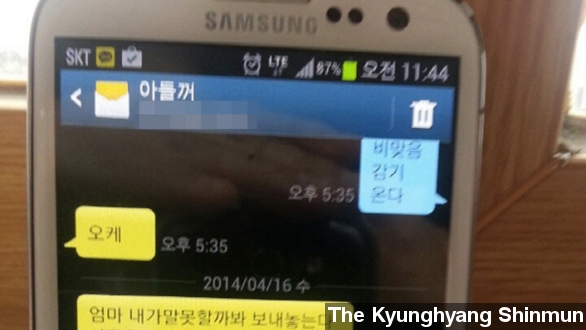 Several of the hundreds of students trapped in the sinking ferry that capsized off the coast of South Korea Wednesday sent desperate texts to their anxious parents — and the messages are heartbreaking.

"One 18-year-old woman writing to her father, 'Dad, don't worry, I've got a life vest on and we're huddled together.' She's still among the missing." (Via ABC)

Officials told the BBC 179 passengers have been rescued from the wreckage, but nearly 300 others have yet to be found by emergency crews frantically searching the waters for survivors.

​Most of the 475 passengers on board the ferry were students from Danwon High School in Ansan. (Via Al Jazeera)

According to several media outlets, many of the students texted their families and friends while the ferry was going down.

A South Korean media outlet got a hold of this screen shot of an emotional exchange between a student on board and his mother. He said, "Mom, I’m sending this message now in case I don’t get to say it later: I love you." (Via The Kyunghyang Shinmun)

And Arirang reports another passenger messaged his father once he was trapped. He responded, "I know help is on the way, but if possible, get outside." The son texted back, "No, Dad, I can't, the ferry is too tilted. There are no kids out in the hallways." (Via Arirang)

Other parents reported receiving texts from their children saying they were alive — but it was unclear if those students were rescued at the time. (Via MSNBC)

These desperate messages illustrate the chaos and confusion as the hundreds on board the ferry scrambled to get to safety before it sank.

It's still unclear exactly what happened to make the ship capsize so quickly and suddenly, but survivors say they heard a loud bang just before it began to sink. (Via Fox News)

Passengers were reportedly told to stay where they were as the ferry started to go down instead of grabbing life vests and jumping into the ocean — an order that may have cost some their lives.

And according to CNN, only one of the ship's 46 lifeboats deployed during the incident. The outlet has not independently confirmed the report but cites YTN as a source.

The captain of the ferry is currently being investigated by police, and he broke down in tears when reporters questioned him about the tragedy. Nine people on board have been officially declared dead. That number is expected to rise.