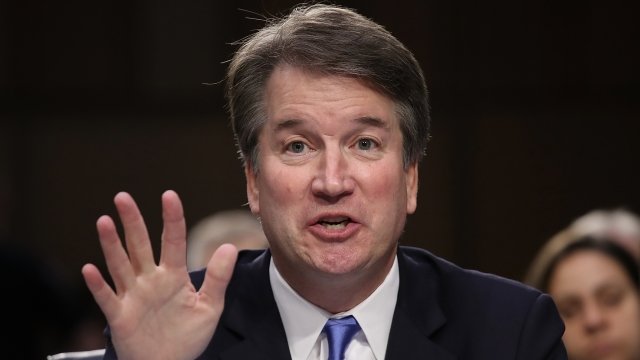 SMS
Senate Committee To Hold Hearing Over Kavanaugh Assault Allegations
By Ahmed Jawadi
By Ahmed Jawadi
September 17, 2018
A committee vote to advance Kavanaugh's nomination was originally scheduled for Thursday but has been delayed.
SHOW TRANSCRIPT

The hearing comes after Democratic lawmakers revealed a letter last week from a then-unnamed woman, who has since gone on the record. Christine Blasey Ford accused Kavanaugh of pinning her to a bed, groping and attempting to undress her in an incident that took place while the two were in high school. Kavanaugh has denied the allegation.

A Congressional source told CNN both Ford and Kavanaugh are willing to testify about the allegations at Monday's hearing. A committee vote to advance Kavanaugh's nomination was originally scheduled for Thursday but has been delayed. Democratic committee members also want the FBI to open an investigation into the allegations before moving forward.

President Trump publicly commented on the allegations Monday, praising Kavanaugh as one of the “finest people [he's] ever known,” and criticizing Democrats for not bringing up the allegations sooner. The president also said he's open to a delay in Kavanaugh's confirmation proceedings while the allegations are being investigated.