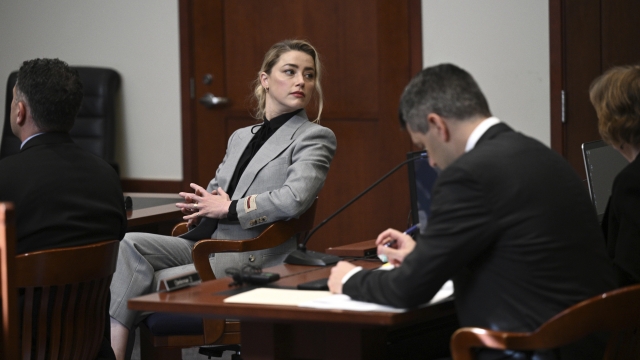 Heard's lawyers have argued that Depp has no credibility when he denies abusing Heard because he frequently drank and used drugs.

Attorneys for Amber Heard, the ex-wife of Johnny Depp, zeroed in on the movie star's drug and alcohol use Wednesday as they defended her from Depp's allegations that she falsely portrayed him as a domestic abuser.

"Ms. Heard says, 'JD is on a bender,' and your response is, 'Where are the kids?' — correct?" Rottenborn asked.

Dembrowski said that was correct. She also confirmed a 2014 email exchange she had with a doctor who treated Depp's addiction to pain medication.

"You believe that your brother needed help with drugs and alcohol?" Rottenborn asked.

Dembrowski responded that she was concerned about Depp's use of one medication but didn't believe that he had a problem with drugs or alcohol overall, or that he romanticized drug culture.

Depp is suing Heard for libel in Virginia's Fairfax County Circuit Court after she wrote an op-ed piece in The Washington Post in 2018 referring to herself as a "public figure representing domestic abuse."

Depp says the article indirectly defamed him by referring to abuse allegations Heard made back in 2016. Depp denies abusing her.

The trial is expected to last for more than a month.

Heard's lawyers have argued that Depp has no credibility when he denies abusing Heard because he frequently drank and used drugs to the point of blacking out and failing to remember anything he did.

In Tuesday's opening statements, Rottenborn said the evidence will show that Depp physically and sexually assaulted Heard on multiple occasions.

He also argued that Heard was exercising her First Amendment rights as an advocate when she wrote the article, which focused largely on the broad topic of domestic violence.

Depp's team asserts that the article is an example of "defamation by implication." In the December 2018 piece, Heard wrote that "two years ago, I became a public figure representing domestic abuse, and I felt the full force of our culture's wrath for women who speak out."

Depp's lawyer, Benjamin Chew, said that's a clear reference to a restraining order Heard sought in May 2016 — right after Depp told her he wanted a divorce — in which she claimed she'd been physically abused.

Both Depp and Heard are expected to testify at the trial, scheduled for six weeks, along with actors Paul Bettany and James Franco and tech entrepreneur Elon Musk.

A civil jury of seven members, plus four alternates, was selected Monday to hear the case.

Heard's lawyers had sought to have the case tried in California, where the actors reside. But a judge ruled that Depp was within his rights to bring the case in Virginia because The Washington Post's computer servers for its online edition are located in the county. Depp's lawyers have said they brought the case in Virginia in part because the laws here are more favorable to their case.