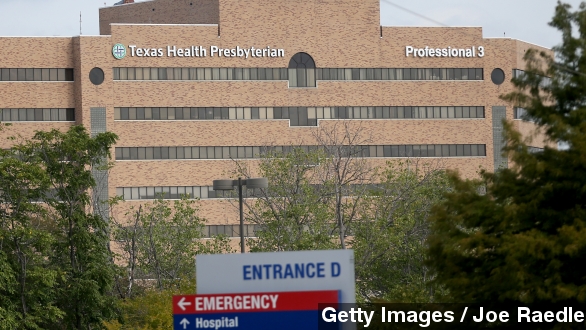 Sunday afternoon, the Centers for Disease Control and Prevention confirmed a healthcare worker in Texas tested positive for Ebola — making her the first person to contract the virus inside the U.S.

The worker had extensive contact with Thomas Eric Duncan, the Liberian national who died of Ebola Wednesday at Texas Health Presbyterian Hospital in Dallas. (Video via NBC)

The Texas Department of State Health Services said Sunday the patient, who was self-monitoring, reported a fever Friday and tested positive during a preliminary test. At the first sign of symptoms, the worker was put into isolation where she currently remains in stable condition.

During a press conference, CDC Director Tom Frieden said the department interviewed the patient and found she had been in contact with one individual while she might have been infectious. That person is now also under active monitoring.

FOX NEWS: "We are evaluating other potential healthcare worker exposers. Because if this individual was exposed, which they were, it is possible that other individuals were exposed."

A doctor with the Texas Health Resource confirmed that, while having contact with Duncan, the healthcare worker wore gloves, a gown, a mask and a shield, which brings up the worrying question of how she contracted the virus.

It also, as CBS reports, raises concerns of a breach of protocol within the hospital. During an interview with the outlet, Frieden explained, "Even a single breach can result in contamination and one of the areas that we look at closely are things like how you take off the gear that might be infected or contaminated."

The hospital has been criticized for its handling of Duncan's case, initially turning him away despite his symptoms and travel history, before ultimately diagnosing and admitting him. (Video via KTVT)

Duncan was diagnosed at the end of September, and, in the weeks since, fear of the virus has swept through the country.

A Pew poll conducted during the first week of October found 41 percent of responders had little to no confidence in the governments' ability to prevent a widespread outbreak.

It's gotten to the point, as The Washington Post reports, where some hospitals are preparing for Ebola panic, hiring more people ahead of an expected increased ER traffic as people are more conscious of possible symptoms.

But still, health officials are continuing to emphasize the point that the virus can be easily contained as long healthcare workers meticulously follow safety protocols.