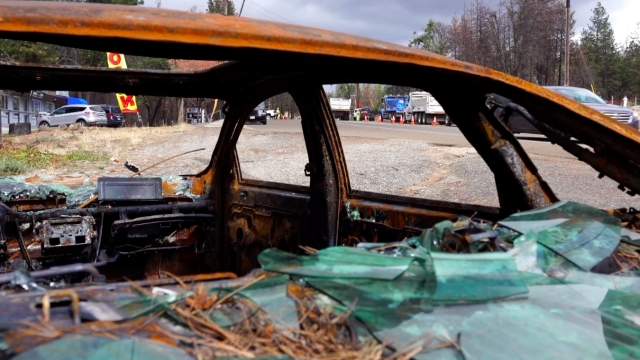 It’s estimated between six and seven thousand households were displaced in the Camp fire. One year later, the public health burden on these people — and on the whole region — is still significant.  As many people camped out or stayed in nearby communities, they pushed the traffic and sewage infrastructure in those towns to the limit. Dr. Andy Miller, Butte County Public Health Department's Medical Officer says Chico, the next town over, suddenly gained 45 thousand people.

"The amount of sewage went up about a million gallons overnight which is 15 years of growth and that happened overnight," he told Newsy.

Within six months of the fire, many had moved on. Now, Chico's extra population is closer to 19 thousand, but other health infrastructure is still stretched thin. A hospital was among the nearly 19 thousand buildings destroyed. California’s Governor Gavin Newsom signed a bill to allow a stand-alone emergency room in Paradise. These are typically illegal in the state of California, but the situation in Paradise is far from typical: Dr. Miller told Newsy the remaining area hospitals are operating with 40 percent more patients than usual.

"Even though Paradise was only about 10 percent of the county's population, it had about 25 percent of the skilled nursing facility beds and almost half of what are called intermediate care beds. And so the loss of that infrastructure really is affecting our existing hospitals when they have people that are well enough to leave the hospital. They may not have a place to go," Miller said.

Crews have been cleaning up Paradise all year, but the burn scar still carries physical health risks. Miller says empty pools and tanks are breeding grounds for mosquitoes, which has helped make West Nile Virus activity widespread throughout Butte County this summer.

Officials still don't know how severe toxic exposure has been in the area over the last year. They've found heavy metals like lead and mercury, and chemicals like benzene, probably  from melted plastic pipes. Short-term exposure can cause eye and skin irritation, and the CDC warns prolonged exposure can cause cancer. Crews are still clearing hazardous waste property by property, separate from a state debris removal program.

Air Quality Researcher Keith Bein says the risks from emissions aren't isolated to the burn scar area, either. For 11 days following the Camp Fire, he says he recorded pollution levels in the Bay Area 100 times higher than normal. These were levels of toxicity never before seen in the U.S.

"A large fraction of the fuel that is burning is not biomass but rather consumer products construction materials cars paints whatever you have. And so now this changes the emissions landscape dramatically," Bein said.

"Typically when you're going to analyze stuff you look for something specific. I'm looking for a molecule here and I'm looking for molecule b. There's another type of analysis where you go in and "just show me everything you can". And you try to find out given these signatures what's in there. Out of about 2000 compounds something like this there was a very very small fraction that we could actually identify that we actually knew what they were," Bein told Newsy.

The community leaders trying to help everyone else are feeling the strain themselves. Dr. Miller, with the public health department, said some staff never returned to work after the fire. Officials estimate it will take between 10 and 30 years to get public health restored to its pre-fire status. County officials say it will be a learning experience — not just for this community, but for other cities across the U.S. that face their own disaster risks.

"Nobody wants this to happen. And unfortunately it has happened. And one of the possibilities is to rebuild a city that is better than it was before," Miller said.